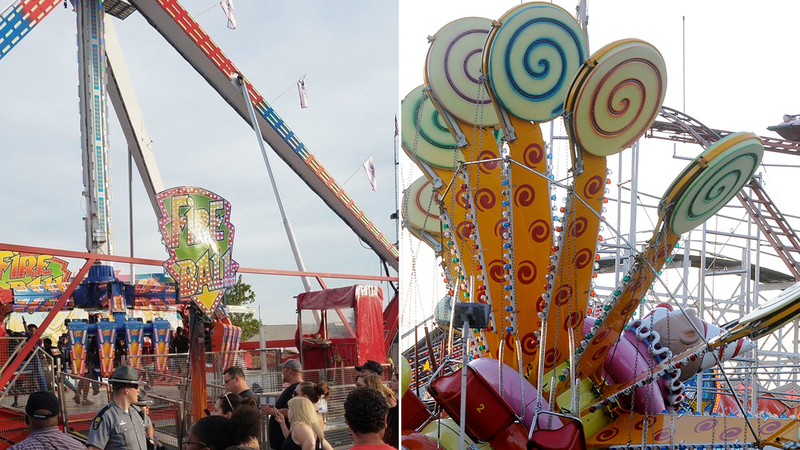 Following an accident at the Ohio State Fair that killed one and injured several others, here's a look back at major accidents on rides at fairs and carnivals around the country in recent years.

Illinois State Fair
A 14-year-old was killed after after she fell from the Kamikaze ride, a 35-foot-ride with a pendulum-like swing. The girl, who had developmental disabilities, panicked and slipped out of her shoulder harness.

2002
North Carolina State Fair
A fair worker was killed when he either stepped or slipped in the path of a ride and was struck by a steel footrest. The man's job was to help riders strap into their seats, but officials said he was not supposed to be on the boarding platform while the pendulum-style ride was in operation.

Puyallup Spring Fair, Washington State
At least 14 people, mostly children, were injured when the Lolly Swing, a revolving swing ride, toppled over. Six of the injured were taken to the hospital.

2011
Houston Rodeo
A man fell to his death from a carnival roller coaster. Investigators later determined that the man had been intoxicated and there were no hazards associated with the ride.

Five members of the same family were injured when a ride began to move as riders were exiting. They had been riding the Vortex, a pendulum ride that flips riders upside down as it swings upward. One family member told ABC 11 he suffered severe brain and spinal cord injures.

2016
Greene County Fair, Tennessee
Three girls fell about 40 feet to the ground when a Ferris wheel cabin tipped over. The car they had been riding in got hooked on another car, causing theirs to turn upside down. All three were sent to the hospital and the youngest, a 6-year-old, sustained traumatic brain injury.