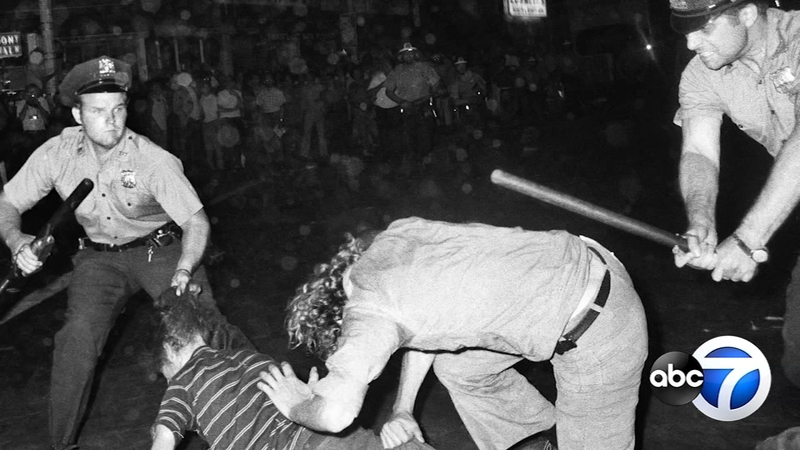 CHICAGO (WLS) -- June 28th marks the 50th anniversary of the riots at the Stonewall Inn, in Greenwich Village, New York.

"You're dealing with a group of people that had been arrested so many times, they didn't have anything left to lose," said Victor Salvo, Legacy Project Co-Founder. "That's when a revolution happens."

During the 1960s, police raided gay bars regularly. Officers would check the ID's of each person there and, sometimes, they'd arrest people who they thought were participating in "disorderly" behavior.

But the raid that night didn't go as planned.

"Somehow or another they managed to yank a parking meter out of the ground and started to wield that, and smash it in the windows of Stonewall, where the police had retreated for protection," LGBTQ Historian John D'Emilio said.

"People in large groups just ran up and down the streets in the Village so that the whole neighborhood would know, 'something is going on here'," D'Emilio added. "It became really, not something that happened on this one corner on one street, but became something that went on for blocks and blocks."

People had been advocating for LGBTQ rights for at least 20 years before Stonewall happened. But now, they were fed up.

"There was a complete social shift in the United States. A seismic shift," Salvo said. "Whatever was going on there, it telegraphed. It got into and under the skin of everybody who was LGBTQ all over the country."

But the people who led that change, aren't always recognized for their work.

"They really remained, many of them, radical street activists who are very important to the life of a movement but in certain ways, remained on the margins," D'Emilio said.

"(Johnson) led the fight in 1969. Several years before, she wasn't even welcomed in Stonewall because she was African American, because she was a drag queen, because she was trans," said Jamie Frazier, pastor of Lighthouse Church. "She was willing to fight for an establishment that wouldn't even let her in five or 10years earlier."

The riots broke down a wall and sparked the change that earlier activists weren't able to achieve.

"One of the first really big things that happened is that the American Psychiatric Association removes homosexuality from its list of mental illnesses. That's a huge victory," D'Emilio explained.

All of these feats were possible with the help of activists like Johnson.

"She organized her community, she demanded resources, and she did the things that were necessary to bring healing and wholeness. Not only to herself but to people like her," Frazier said.
Report a correction or typo
Related topics:
community & eventschicagopridespotonlgbtqlgbtq pridepride monthlgbt
Copyright © 2022 WLS-TV. All Rights Reserved.
TOP STORIES
Illinois reports 40,642 new COVID cases, 137 deaths
'So much deceit': Brother of Lori Vallow speaks out on family divide
Retired CPD officer, 57, killed in Edison Park hit-and-run
Maryland man dies with more than 100 venomous snakes in his house
1 killed, 1 critically injured in Hampshire facility explosion
Chicago's top doctor says end to COVID-19 mandates 'in our future'
'Wheel of Fortune' contestant gets her Audi after bonus round pause
Show More
Multi-vehicle crash injures 2 people, 1 seriously, ISP says
Bologna face mask, celebrity gossip and reporter hit by car on live TV
Louie Anderson, Emmy-winning comedian, dies at 68
U of I tuition, housing costs going up for 2022-23
Roz Varon's Weekender Report
More TOP STORIES News