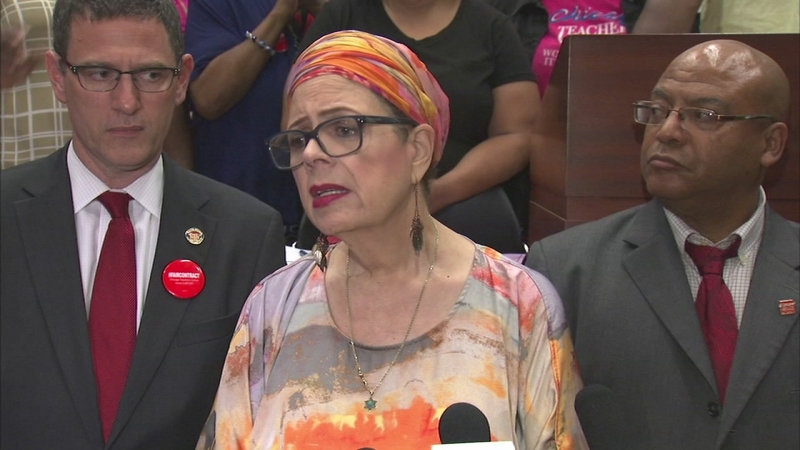 The union already voted on a strike authorization in December, with 88 percent of all teachers authorizing a strike, but union officials said a second vote would cover them legally to strike this fall.

Union officials are also expecting the number of members voting to authorize a strike to rise.

"We've been polling our members. Quite frankly, it's going to be higher," said CTU president Karen Lewis.

Chicago teachers have been working without a contract since last year. CTU and CPS officials go back to the bargaining table on Thursday.

Mayor Rahm Emanuel said teachers will get a 13 percent raise over the life of this contract, but the hitch is the district would eliminate a 7 percent pension payment.

"It's their pension they are going to pay into, that they themselves and their family will get," Emanuel said.

"I am going to defend our right to be paid," Lewis said.

Because teachers are the ones retiring the pensions, Emanuel said they should contribute. However Lewis said the union will not budge on the pension issue.

Seveny-five percent of teachers must approve the strike and the union must give Chicago Public Schools 10 day notice before they can strike, so the earliest that teachers could strike is early to mid-October if an agreement cannot be reached.

"A strike can be averted, and CPS will work tirelessly to make sure children's education and progress is not interrupted. CPS teachers do great work - especially propelling the Chicago students' remarkable academic gains - and we want to give them a fair raise that works within our budget constraints... Working closely with the CTU leadership, we have already come close to a final agreement that made historic gains in teachers' day-to-day quality of life, including more freedom on grading, fewer evaluations, less paperwork and establishing community schools. Since these issues have been CTU priorities for years, we are hopeful we can preserve as much of that framework as possible going forward."

For their part, the teachers said they are ready for the strike authorization vote.

"We are seeing people leaving in droves and this is why we voted to authorize another strike vote," said teacher Michelle Gunderson.

"It's a sad state, and so that's why we're willing to fight. Because we are professionals," said teacher Tara Stamps.

During a school visit on Wednesday, Emanuel said he hopes teachers focus on their classrooms rather than the possibility of walking off the job.

"Let's use our energy at the negotiating table to find a solution that secures our teachers pensions because they are going to be the ones retiring on it," Emanuel said.

Lewis is calling on CPS to come up with more revenue via such things as a corporate head tax or diverting more Tax Increment Financing funds, known as TIFs, to schools. Two city council proposals under consideration would move TIF money to schools in alderman's wards. One of the proposals are by Ald. Joe Moreno (1st Ward).