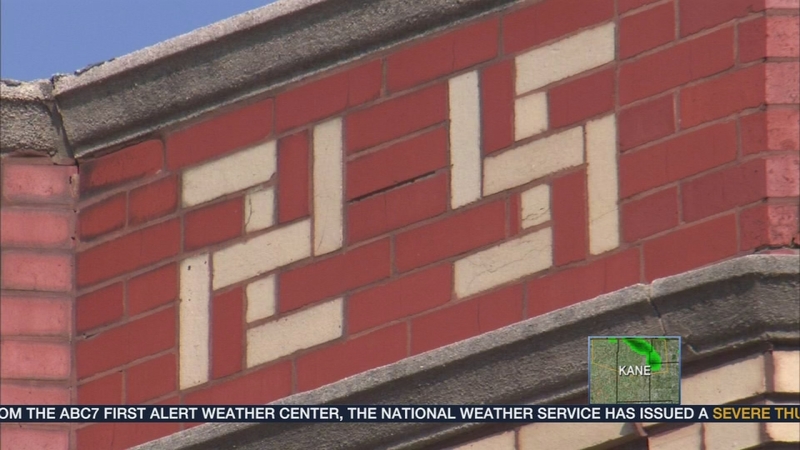 CHICAGO (WLS) -- There are new concerns about an old symbol after an international religious group flew a swastika banner over Chicago's lakefront last weekend.

Even with a recent focus on Confederate flags, it was the swastika symbol that attracted attention in the skies over Chicago, flown by a group hoping to rehabilitate the Nazi's hateful logo back to where it began, as a symbol of peace and well-being. It's also a symbol the I-Team found across Chicagoland.

In 1935, Nazi Germany adopted the longtime symbol of life as it's emblem of hate.

The swastika's sudden change from good to evil left thousands of buildings in Chicago and across the globe displaying a symbol of Hitler's horrors. And many still do.

A swastika is on the front of Chicago's most popular tourist attraction, Navy Pier, and seen at the one of Columbia College's South Loop buildings. It is embedded in marble floors at University of Chicago on the Lower West Side and an embellishment on a city monument to Jacques Marquette. The design is on what is now the Bridgeview Bank, and the former Continental Illinois Bank, along with countless pre-WWII Chicago homes and apartment buildings.

"It's one of the most frequently asked questions," says Joyce Litoff of the Bahai Temple.

The Bahai Temple's 1920s and its facade showcases religious symbols including swastikas.

"These are symbols of the world's religions that we believe come from a single God and are being progressively revealed," Litoff says.

"It has been vilified because it was hijacked by the Nazis," says Larry Abdullah, a member of the pro-swastika movement. "This gave it a bad reputation which it didn't deserve."

Chicago dentist Larry Abdullah is part of the international pro-swastika movement, composed mostly people from the Raelian faith that cherishes the symbol.

On Saturday they flew banners over Chicago's lakefront and Long Island, New York, and distributed flyers in cities around the world.

"You can't erase what was done by the evil men and their evil deeds," Abdullah acknowledges. "At the same time, you shouldn't restrict the millions of people who cherish the symbol from using it."

That symbol stands for a lot," says Lonnie Nasatir of the Chicago Anti-Defamation League. "A lot of pain, a lot of destruction, a lot of hate."

For many, what the Nazi swastika represents can never be reversed.

"Anyone who looks back at history and has a sense of what happened and the brutal nature of the Holocaust, of innocent people going to the gas chamber, and it was under the guise of Nazi control, Nazi power of the swastika, it's hard not to look at that symbol and think of those atrocities," says Nasatir.