Taste of Chicago cancelled for Saturday due to weather

Organizers cancelled the Taste of Chicago for the entire day Saturday due to the morning's heavy rain,

CHICAGO (WLS) -- For the first time in its 34-year history, organizers cancelled the Taste of Chicago for the entire day Saturday due to the morning's heavy rain and while some people understand, others are questioning the decision.

In a surreal scene, the grounds of the Taste of Chicago in Grant Park on what would be the busiest day of the festival are empty.

A bus load of tourists from Flint, Michigan arrived after driving five hours to spend the day at Taste of Chicago. Their trip is in vain. The Taste is rained out.

"We don't know what else to do around here because we came specifically for that," said Natasha Cooper.

There are tens of thousands of disappointed Taste fans being turned away at the gates all day.

And as the sun makes an appearance, many question how earlier rains could force the first full cancellation in the festival's 34-year history.

The cancellation will cost vendors and sponsors big money. Eli's Cheesecake had a birthday special 1,000-pound cake ready to display.

"Saturday is the biggest day. I was out here at 7 o'clock (Friday night) until 10:30 (Saturday) morning and it's hard to believe now here in sunshine, but it was a very dangerous condition," said Marc Schulman, Eli's Cheesecake.

Despite the rain, most other city festivals, including West Fest on Division, continued uninterrupted Saturday. They put out a tweet saying, "We do not cancel for a little rain."

During the brief period, Taste of Chicago organizers allowed media inside the grounds and there was plenty of standing water. That apparently causes a number of safety issues, as well as problems getting power.

The city is promising full refunds for those with tickets to the concert scheduled for Saturday. 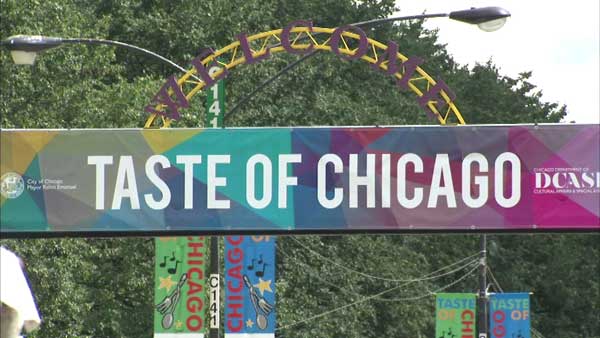