Teen charged in connection with robbery spree on Northwest Side One of a string of armed robberies in Albany Park was reported near Montrose and Kimball avenues.

The Cook County District Attorney's Office said a suspect, age 15, was charged with robbery and theft from a person in a string of armed robberies in Albany Park Sunday night and Monday morning.

On Monday morning, police put out an alert for a stolen black Nissan with up to four suspects inside after nearly a dozen people were held up Monday. Police said the same group could be responsible for as many as 16 armed robberies in the area.

At about 1:30 p.m., police located the vehicle in the 7600-block of Rogers Avenue. Two people were seen running from the vehicle and were taken in for questioning without incident, police said.
Report a correction or typo
Related topics:
albany parkchicagorogers parkarmed robberycarjacking
Copyright © 2021 WLS-TV. All Rights Reserved.
RELATED 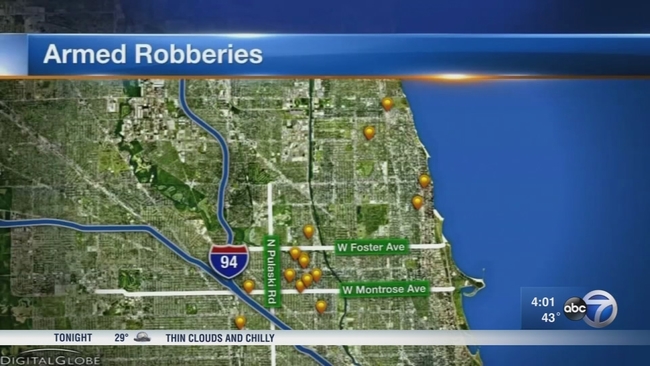