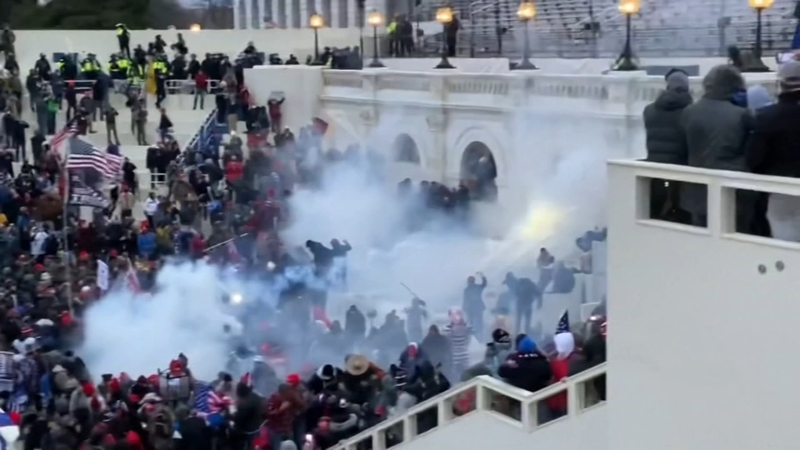 CHICAGO (WLS) -- Exactly three weeks after a mob of domestic terrorists attacked the U.S. Capitol, the national temperature is still so high that Homeland Security officials on Wednesday warned all Americans of the ongoing threat to their safety.

It was the first time in more than a year federal authorities needed to trigger the government's terrorism alert system, warning of violence by groups and extremists "motivated by a range of issues including anger over COVID-19 restrictions, the 2020 election results, and police use of force have plotted and on occasion carried out attacks against government facilities," and "long-standing racial and ethnic tension -- including opposition to immigration" the DHS warning stated.

The window for violence runs through April, although law enforcement experts interviewed by the ABC7 I-Team said an attack could occur at anytime and anywhere.

The warning system, last used when Iranian military commander Qassem Soleimani was killed during a U.S. drone strike in Baghdad in Jan. 2020, was originally intended to alert Americans to impending attacks by foreign terrorists. Now it is focused on home-grown extremists who are "fueled by false narratives," according to federal investigators.

The falsehoods include a belief that Donald Trump won re-election as president and the November election was stolen by Democratic party officials, both of which are not true.

"One of the concerns they have is people have not accepted the results of the election and will utilize violence as a means to achieve a goal of ideology-of overturning the election," said former deputy U.S. Marshal in Chicago Ed Farrell.

The Homeland Security warning that violent plots may be hatched comes even as arrests continue of those who allegedly crashed the U.S. Capitol on Jan. 6. Investigators are also likely in the process of trying to determine whether there is a nexus between the Capitol attack and a kidnapping plot last summer that targeted Democratic Michigan Governor Gretchen Whitmer, Farrell said.

"Tying those facts together can be very difficult and that's where hopefully they get cooperators," the ex-federal marshal said on Wednesday. "They're able to point them at either the head of the organization or other splinter groups that share the same ideology."

In Michigan authorities indeed have their first guilty cooperator. A 25-year-old Michigan man pleaded guilty to federal kidnapping conspiracy and admitted that the target of the abduction scheme was the state's governor.

Ty Garbin's plea agreement filed Wednesday morning in Grand Rapids describes the violent plot against Whitmer by members of a group known as Wolverine Watchmen. In a late morning court appearance, Garbin pledged to fully cooperate with the government in their continuing investigation of the outrageous scheme and ongoing prosecutions.

Garbin helped run the group through commando training in Michigan and Wisconsin, federal agents said, and also planned an attack on Whitmer's lakefront vacation home according to the plea agreement.

Garbin is the first of six federal defendants facing conspiracy to commit kidnapping charges. They all face the possibility of life in prison. While Garbin's plea agreement doesn't prescribe a specific sentence recommendation, typically prosecutors and judges reward those who plead guilty with lighter sentences.

Investigators said Garbin had a leadership role with the militia group and had met the plot's other accused leader, Adam Fox, during an armed protest at Michigan's capitol last summer. Fox has pleaded not guilty, as have the others charged in federal court and an additional eight defendants charged in state court with terrorism and gun violations.

Federal prosecutors said as the kidnap plot planning was launched, Garbin and the others rehearsed with improvised explosive devices, some of which authorities seized when they took down the militia group. Investigators said they found an encrypted message from Garbin in which he discussed blowing up a highway bridge near the governor's vacation home as a way to "hinder" law enforcement responding to the attack on her and her family. According to the federal indictment, one of those charged in the kidnapping plot suggested if police showed up during a reconnaissance mission, the group planned to kill officers after giving them one chance to leave on their own.

Even though Garbin's militia plot against the governor and other unnamed Michigan leaders was to take place last fall, the elements of the violence he admits has several similarities to the U.S. Capitol attack that took place months later. Among them: participants were to use zip-tie restraints during the assault. Militia-linked Trump partisans and violent extremists were seen in the U.S. Capitol with batches of plastic restrains.

The rogue kidnap blueprint in Michigan was first laid out during a clandestine meeting of militia members from several states that occurred in Dublin, Ohio, June 20th of last year. Attendees discussed removing "tyrants" from public office in various locations including the Michigan State Capitol "and proposed using Molotov cocktails and other improvised explosive devices ("IEDs") to distract and hinder law enforcement during the operation."

The Michigan plot, according to Garbin's plea deal, called for the kidnapping of Whitmer from her Mackinac Island summer home and holding her for a public trial. Militiamen constructed a "shoot house" from plywood and practiced breaching the building to simulate assaulting the Capitol and elsewhere. They also rehearsed combat battlefield first aid to treat shrapnel wounds and gunshots during a melee. As the I-Team reported in November, one component of the scheme involved ferrying Whitmer in a boat to the middle of Lake Michigan and leaving her there.

According to the court filing, militia members had assault-style rifles, silencers, pistols, grenade launchers, bombs, body armor, ballistic helmets and night vision equipment to use in their planned attack. The court filing described surveillance and recon missions conducted by the kidnap squad on the governor, her family and their vacation residence.

During the ramp-up to the November presidential election, there was some thought that Whitmer would be named to a cabinet position if Democratic candidate Joe Biden were to beat incumbent President Donald Trump. Were that to happen, militiamen said they would attack her Secret Service detail with a shoulder-fired rocket, according to the plea agreement, and take out the lead car of her security caravan.

Another component of the plot involved the gruesome public executions of a hundred or more officials by hanging them on live television. The kidnap plot never came to fruition and no one was ever harmed although members of the alleged conspiracy did get within shooting distance of Gov. Whitmer on several occasions.

Garvin's attorneys did not respond to I-Team messages left on Tuesday.

He is not the only member of the militia group cooperating with authorities, the I-Team has learned. Some of his militia brothers are helping the government according to newly filed federal court records reviewed by the ABC7 I-Team. A number of uncharged militiamen have appeared in front of a secret grand jury; testimony that federal prosecutors have asked a judge for permission to share with Michigan state attorneys for use in prosecuting their own cases.