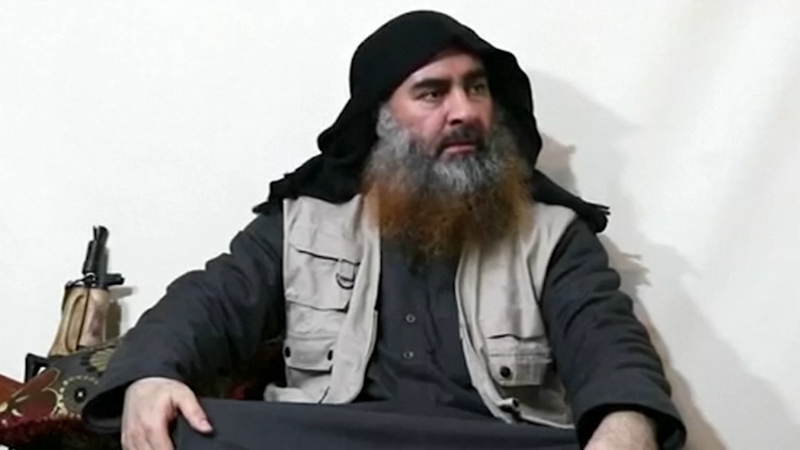 Homeland Security, the FBI and other counter-terror agencies across the country and around the world are refocusing efforts on ISIS after several deadly attacks and the recent video reappearance of radical leader Abu Bakr al-Baghdadi.

The fiery Islamic State leader, head of a new "caliphate" to entrench radical, violent beliefs worldwide, hadn't been seen publicly in five years and numerous reports had him dead.

An FBI/Homeland Security intelligence bulletin from last week obtained by ABC News states that "Baghdadi's appearance almost certainly will bolster the morale for ISIS's existing supporters around the world, including those in the United States, by indicating Baghdadi is alive and in control of the group as of late April 2019."

Federal officers in Chicago, New York, Los Angeles and other U.S. cities long known to be on jihadists' target lists are also circulating a new alert package aimed at helping identify potential terrorists preparing to strike or with plots in the works. "Homegrown Violent Extremist Mobilization Indicators" breaks out telltale signs of potential terrorist risks into three groups based on the immediacy of the threat.
"The indicators of violent extremist mobilization described herein are observable behaviors that could help determine whether individuals or groups are preparing to engage in violent extremist activities, such as conducting an attack or traveling overseas to join a foreign terrorist organization," the alert states.

Among the warning signs of an imminent terror threat is a person preparing a martyrdom video statement or last will. There are dozens of other less imminent indicators of a possible terrorist in the making.

Many of those, including social media searches, accessing extremist videos and concealment of behavior, were the tactics used by suburban Chicago terror subject Adel Daoud, who was sentenced Monday in a federal courtroom to 16 years in prison.

Daoud's porous nature at the time he was recruited to participate in an FBI sting in 2012 was similar to the description of "homegrown violent extremists," according to the FBI bulletin. In the alert, U.S. intelligence experts state that homegrown violent extremists "generally do not mobilize to violence in response to specific events and instead are usually influenced by a confluence of sociopolitical, ideological, and personal factors. However, those wavering in their commitment to ISIS might feel a sense of renewed devotion to the group as Baghdadi is alive and apparently still managing ISIS."
Report a correction or typo
Related topics:
isisterrorismfbiu.s. & worldi teamsecurity
Copyright © 2022 WLS-TV. All Rights Reserved.
I-TEAM
Wedding guest budgeting tips
Postal police say they are sidelined during time of heightened crime
ISP combating expressway shootings with new technology, tactics
IN man pleads guilty to being in US Capitol during Jan 6 insurrection
TOP STORIES
Security guard hurt after confrontation at suburban Walmart: police
Some peanut butter recalled for potential salmonella
ABC7 presents 'Our Chicago: Asian Voices'
New rules, recent shootings not keeping Millennium Park visitors away
'Absolutely terrified' teen boy dies hours after 'sextortion' scam
'Multiple people' injured in shooting in northern Indiana: police
Security guard shoots man in buttocks at Millennium Park
Show More
Wedding guest budgeting tips
10 shot in weekend violence, Chicago police say
Career fair hopes to change narrative for young Black life
Chicago mass shooting victim ID'd as father of 2, with twins on way
At least 1 dead, 44 injured after tornado strikes northern Michigan
More TOP STORIES News