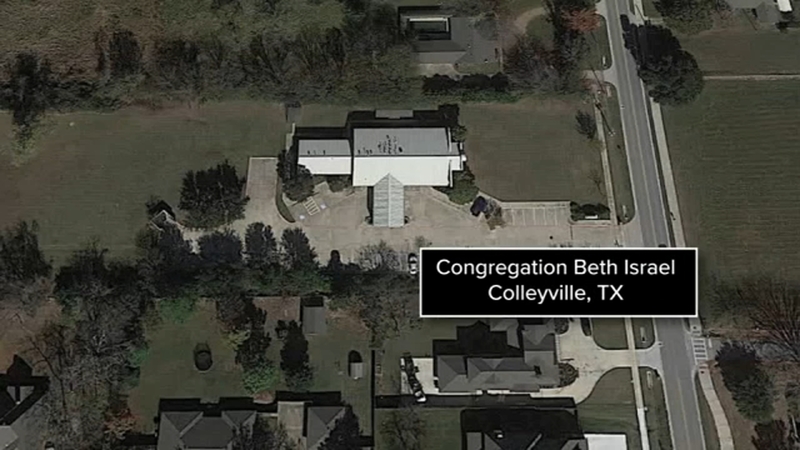 COLLEYVILLE, Texas -- Editor's Note: This story previously said the hostage-taker claimed to be Aafia Siddiqui's brother. Her brother's lawyer, John Floyd, told ABC News by phone that his client is in Houston and he relayed that information to law enforcement.

A 10-hour-long hostage situation at a synagogue in the Dallas-Fort Worth area came to a conclusion late Saturday with all of the hostages safe and the suspect dead, law enforcement officials said.

"Two teenagers were detained in South Manchester this evening. They remain in custody for questioning," Greater Manchester Police posted in part on Twitter.

An armed suspect claiming to have bombs in unknown locations took a rabbi and three others hostage at the Congregation Beth Israel in Colleyville before noon Saturday, a source familiar with the situation told ABC News. One hostage was released uninjured at about 5 p.m. local time, Colleyville police said.

At about 9:30 p.m. local time, Gov. Greg Abbott tweeted, "Prayers answered. All hostages are out alive and safe."

Colleyville Police Chief Michael Miller said an elite FBI hostage rescue team breached the synagogue at about 9 p.m. local time and rescued the hostages. Miller and FBI Dallas Special Agent in Charge Matt DeSarno confirmed the suspect was dead in a "shooting incident," but did not provide specifics.

RELATED: What we know about Malik Faisal Akram

During the standoff, it was unclear to what extent the hostage-taker was armed. The suspect was carrying backpacks and had said that he has explosives. Law enforcement would not say at a press conference whether he actually did have explosives.

Stacy Silverman and Olivia Zelling were watching the livestream of the synagogue service when the hostage takeover happened Saturday. They share details of the horrifying experience with "GMA."

While authorities would also not confirm the demands made by the hostage-taker, multiple law enforcement sources told ABC News he was demanding the release of convicted terrorist Aafia Siddiqui. DeSarno said the hostage negotiation team was in contact with the suspect throughout the day.

Siddiqui is incarcerated at Carswell Air Force Base near Fort Worth, according to the source. She had alleged ties to al-Qaida and was convicted of assault and attempted murder of a U.S. soldier in 2010 and sentenced to 86 years in prison.

Officials said there is no evidence this was part of a larger plot, but police are investigating the connections of the suspect.

The FBI responded to the scene, along with local authorities and hostage negotiators. The Bureau of Alcohol, Tobacco, Firearms and Explosives also responded to the situation, according to an agency spokesperson.

Law enforcement was hoping to diffuse the situation without doing anything that could jeopardize the safety of the rabbi and the other three. They ordered the suspect food and continued to negotiate.

As an hours-long hostage situation unfolded at a synagogue in Colleyville, Texas, some synagogues in Illinois are now with upgraded security measures.

In a statement released following the conclusion of the incident, Biden said, "There is more we will learn in the days ahead about the motivations of the hostage taker. But let me be clear to anyone who intends to spread hate -- we will stand against anti-Semitism and against the rise of extremism in this country. That is who we are, and tonight, the men and women of law enforcement made us all proud."

Department of Homeland Security Secretary Alejandro Mayorkas has also been briefed on the situation, according to a DHS spokesperson.

UPDATE 1/15/22, 2:20 PM The situation at the 6100 block of Pleasant Run Road posted about earlier remains ongoing. We ask that you continue to avoid the area. We will continue to provide updates via social media.

The Colleyville Police Department's SWAT team responded to the area before 11 a.m. Saturday and evacuated residents in the immediate area.

The Texas Department of Public Safety was also on the scene of what Abbott had described as a "tense hostage situation."

"They are working with local and federal teams to achieve the best and safest outcome," Abbott said on Twitter. "I continue to monitor the situation through DPS."

Police departments in a number of American cities, including New York and Los Angeles, said Saturday they were stepping up patrols at synagogues and other locations associated with the Jewish community out of an abundance of caution.

The Dallas Police Department is deploying additional patrols to city synagogues and other sites "as a precaution," Dallas Mayor Eric Johnson said on Twitter Saturday afternoon.

"Police are working with the Jewish Federation and our local, state, and federal partners to monitor any concerns or threats based on the situation in Colleyville," he added.

UK officials said they continue to assist the U.S. in the investigation.