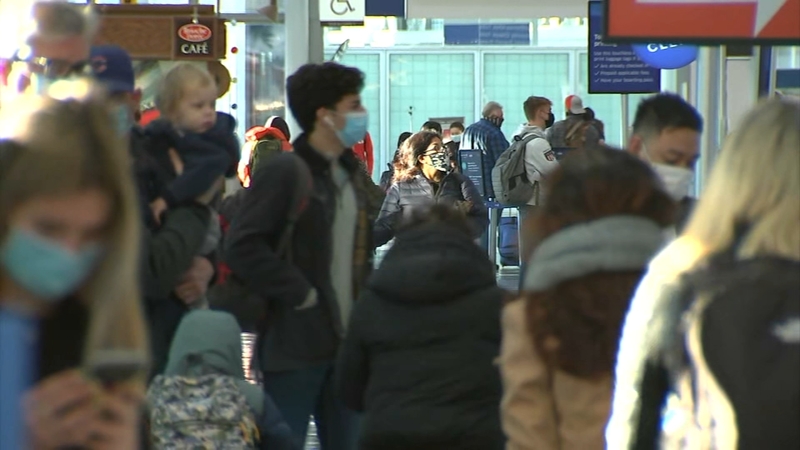 Despite warnings, many still traveling for Thanksgiving

CHICAGO (WLS) -- On this Thanksgiving holiday, Illinois health officials are making one final plea for people to rethink their plans and not travel

From traveling in the air at the airport, to hitting the road in the car, people are still traveling for the holiday despite warnings from health officials.

"It's always on the back of our minds, you hear it on the news, the spikes and everything, but this was a pre-planned trip," said Patrick Pinson, who is flying for Thanksgiving.

RELATED: Respiratory therapists struggle to keep up with demand as COVID-19 cases continue to rise

With so many people moving ahead with their plans, still many are keeping the virus top of mind and making adjustments.

"I'm actually going to see my dad so that we have a two person Thanksgiving," said Hannah Gilbert, who is driving for Thanksgiving. "He just had heart procedure and I am going so he doesn't go to the big family Thanksgiving."

More people are also getting tested. More than one million tests have been given in Illinois in just in the past ten days. That puts the state at more than ten million total tests.

Johanna Johnson is picking up her son and his girlfriend from college for the holiday, and all have gotten tested.

"They have testing them every two weeks at college and I feel like Lawrence has done a great job with testing and monitoring people and then I got tested last week and was negative and I think we are ok," Johnson said.

And state health officials warn the demand for testing could be even higher after Thanksgiving, the advice is to wait a little while after the holiday.

"Most people will show a positive test, if they're going to, at day seven," said Illinois Director of Public Health Dr. Ngozie Ezike. "So we would like people to wait at least a week. Obviously if you develop symptoms before then, please test immediately."

It's been a deadly week during this pandemic. On Wednesday, the state reported 155 new deaths, for a total of 818 in the past week.

The crowds are only expected to grow. Next Sunday is likely to be the busiest day of the holiday period.

The Chicago Department of Aviation said safety is paramount, and we all have a role to play.

Governor JB Pritzker said he thinks this is the only year he'll ask people to spend the holidays away from loved ones.

"What we don't want to see is yet another surge superimposed upon the surge," Fauci said.