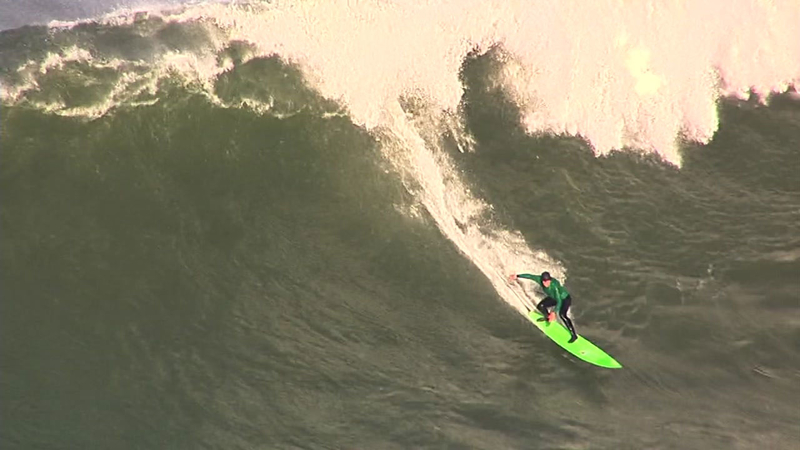 HALF MOON BAY, Calif. -- The Titans of Mavericks surfing competition kicked off this morning. It's called one of the most hazardous sporting events in the world.

Weather permitting, ABC7 News will livestream the finals of the Titans of Mavericks competition. Check back here around 1:30 p.m. to watch live.

The 24 contestants were given 48 hours to get here from all around the world. Last year the call was never made to run the contest because the waves never got big enough. This season, though, that hasn't been a problem. The surfers have been contending with waves as high as 35 to 40 feet all day.


The twist is this event no longer allows spectators on the beach or the bluff after 13 people were injured in 2010's tournament by a rogue wave.

RELATED: Women hope to someday be invited to Mavericks

"We're really discouraging people [to come to the shore] because we don't want to talk to families about what happened to their loved ones," Deputy Harbormaster Cary Smith said.

"You're still like tense. It's going to be gnarly out there. There's going to be some big waves. So your body knows it," said Collins.

Unfortunately Collins felt the pain early. Announcers from the Red Bull broadcast say he blew out his eardrum in a wipe out in round one and nearly drowned.

Competing in the Titans of Mavericks is worn like a badge of honor, especially since it's not a guarantee the contest happens every year.

The contest was cancelled in 2015 due to a lack of waves.

"It's great to be back, especially since it's an El Nino year. We knew it would have to happen eventually but it was just plagued by this strong south wind over the last month or so and it was good to see that finally let up and give us a chance," said Mark Healey, surfer.

The prize pool is $125,000. After the event, the surfers will meet up in Half Moon Bay for the awards ceremony.

People should expect no access to the beach or roads to the beach. If you want to watch the event, it will be streamed here.

Also the Harbor Bar they'll have the action up for people to watch.

Just last month, we got a preview of the real thing. Huge waves were breaking at Mavericks on Jan. 7, and world-renowned big wave surfer Garrett McNamara wiped out, breaking his arm.

If you want to get closer to #mavericks the sheriff will stop you at Stanford and West Point pic.twitter.com/1X5eR7XoY1

Surfers hitting some gnarly waves at the #MavericksSurf competition. https://t.co/Vw9iW9MlyMhttps://t.co/mObmY5S3nf

Heading out to dump these buoys to mark competitor's zone and spectator zone. pic.twitter.com/TGFspCbUpL

Harbor Patrol told me this is one of those unsinkable boats. "Allegedly."
Why did he say "allegedly?"#Mavericks pic.twitter.com/3cuSaS7byQ

What waves?
Half Moon Bay is just showing off.#TitansofMavericks pic.twitter.com/Nxhptn4CRR

At this rate you might not get a table until the next #mavericks. #abc7now pic.twitter.com/eCzZ4C2K1M

When the bars are five deep at 9am…yeah. This is happening. #Mavericks Surf. #abc7now pic.twitter.com/T9sMPZXCbN

Bobby will be pouring drinks in the Harbor Bar. “It’s a shot in the arm in slow season.” #Mavericks pic.twitter.com/6GAMSDVYD2

Here’s Jeff, prepping board for one competitor who had to leave on short notice. #Mavericks pic.twitter.com/VfImpXmTgj