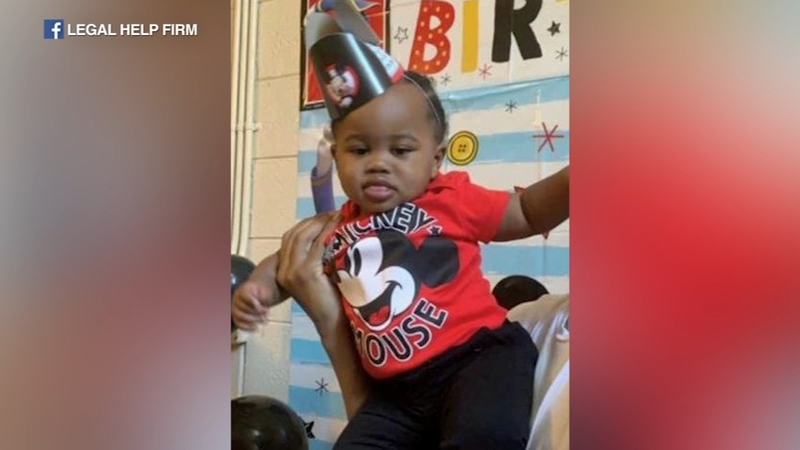 CHICAGO (WLS) -- A 21-month-old boy who was shot Tuesday on Lake Shore Drive has been removed from a medically induced coma, but remained on a ventilator Saturday.

Doctors at Lurie Children's Hospital said Kayden Swann "continues to demonstrate positive improvements," though he is still in critical condition in the pediatric intensive care unit.

While he's still on a ventilator to "assist with his breathing and other critical therapies," doctors deemed it safe to remove him from the coma, according to a statement from Dr. Marcelo Malakooti, medical director of the hospital's pediatric intensive care unit.

Jushawn Brown, a 43-year-old man in a relationship with Swann's grandmother, was behind the wheel of Swann's car and got into a verbal dispute with the SUV driver, which escalated when both men pulled out guns, prosecutors said.

Brown eventually drove away but the SUV driver still fired shots at the car, one of which pierced the rear passenger window and struck Swann in the head.

Brown was slapped with felony gun charges in connection with the incident and released on $5,000 bail.

The SUV driver has not been arrested.

Brown, told ABC7 his side of the story of theshooting on Lake Shore Drive last Tuesday, which conflicts with the account of his now ex-girlfriend.

"I was going northbound on Lake Shore Drive by Soldier Field and I was going far to the right, you know how the lane merges, a car was speeding up fast, going more than probably 55-60 miles an hour," said Jushawn Brown.

Brown said that other vehicle nearly hit him. He said he pulled aside the SUV, telling the driver to slow down. Brown spoke to ABC7 Thursday night as he was released from custody on a gun charge.

"When I pulled out to get away from him, that's when he started shooting," Brown said. "Shot about five times."

Although Brown admits he did have a gun on him, he said he never fired at the other vehicle.

"No. No, not once. They checked me for gun residue, everything. I did not fire my gun," he said.

But in an exclusive interview with ABC 7, Brown's now ex-girlfriend Quiana Farr puts the blame squarely on him, saying he fired first at the SUV.

"This all about bobbing and weaving in traffic," Farr said. "This wouldn't be. He initiated this."

"He initiated this whole situation," said Clifton Marvel, Kayden's great grandfather. "If he had not fired shots at this other vehicle none of this would have happened."

Brown said his girlfriend was hysterical over the situation, especially once she realized the toddler had been shot, so it was possible she thought he fired the gun, but firmly insisted he never did.

In response to Brown's comments, Marvel reiterated that Brown fired his gun.

But in court Thursday, prosecutors said there are no shell casings to prove Jushawn Brown ever fired his gun.

Police said that's part of their ongoing investigation and they won't say if the driver of the SUV is in custody.

"There was a lineup last night where my daughter was able to identify the other shooter in the other vehicle," Marvel said.

One thing the former couple does agree on is their love for 21-month old Kayden, who remains sedated in intensive care.

"How do I feel about that baby? I love my grandson," Brown said. "He loves me."

"I can't sleep," Farr said. "I can't close my eyes. It's like a nightmare. It repeats over and over."

The Sun Times Wire contributed to this report