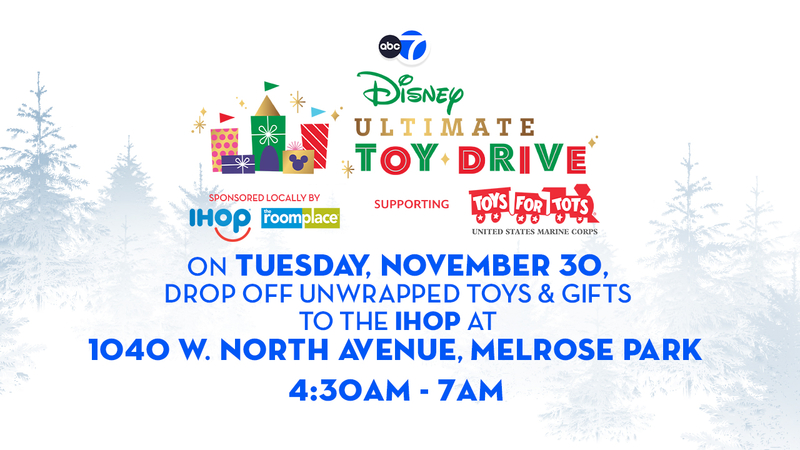 CHICAGO (WLS) -- As part of the Disney Ultimate Toy Drive, sponsored by IHOP and The RoomPlace, ABC7 Chicago meteorologist Tracy Butler hosted a "Stuff the Truck" toy drive, live on ABC7 Eyewitness News' "Giving Tuesday," Nov. 30 from 4:30-7 a.m. ABC7 viewers had the chance to bring the joy of the season to Chicago-area children when they donated new, unwrapped toys and "Stuff the Truck" stationed at the IHOP Melrose Park location (1040 W. North Avenue). The drive-thru event allowed people to stay in their cars safely and "Stuff the Truck" for kids in need this holiday season by helping out the U.S. Marine's Toys for Tots initiative.

The RoomPlace VP of stores described his favorite toy during the ABC7 holiday drive.

This is the eighth year ABC7 has partnered with the U.S. Marine Corps for their Toys for Tots efforts. Tracy was joined by Sgt. Yizet Vargas to talk about this annual event and their mission: "To distribute those toys to less fortunate children at Christmas."

WATCH: Marines given $11K check for Toys for Tots

The Marines were given an $11K check for Toys for Tots Tuesday.

James McCracken and Sean Parris, stars of the upcoming Disney Channel Original Movie "Christmas...Again?!," set to release on Dec. 3, were special guests at the "Stuff the Truck" toy drive. McCracken, who is from the Chicago area and Parris, who is based in Chicago, talked about the fun they had making this new movie which was filmed in the Windy City.

Disney stars Sean Parris and James McCracken talked about their new movie at the toy drive.

For the sixth consecutive year, Immaculate Conception Grade School in Elmhurst, Illinois, has proudly participated in this special "Stuff the Truck" event. Fr. Thomas Paul and Principal Cathy Linley believe that helping others is what their students do best and that this toy drive provides a gratifying way to kick off the Christmas season by giving back to children in need.

The Scarpelli family (with Ray and Raymond Auto Group - Chevrolet, Chrysler, Dodge Jeep and Ram in Fox Lake and Kia and Chevrolet in Antioch) returned for their second year to "Stuff the Trunk" of their brand new Jeep Wagoneer with toys which they will donate.

Ray Scarpelli from the Ray Auto Group in Fox Lake and Raymond in Antioch brought toys to the drive.

Radio Flyer has been powering play and inspiring imagination in kids of all ages for more than 100 years. The Chicago-based company is dedicated to giving back to its community and is donating 40 toys including wagons, tricycles, and scooters!

WATCH: Radio Flyer representative happy to be back at toy drive

Radio Flyer representative Mindy Stumpf is happy to be back at the toy drive this year.

The Walt Disney Company has brought comfort, happiness and inspiration to kids and families in need during the holiday season with Toys for Tots. Disney is inspiring hope where it's needed most and has contributed a $500,000 donation to Toys for Toys.

Disney presented Toys for Tots with a $25K check Tuesday.

The toy drive kicked off with hosts Val Ryan and Ryan Chiaverini on ABC 7's Windy City Weekend, Friday, Nov. 12, at 11:30 a.m. This is the eighth year that ABC 7 Chicago has joined forces with Toys for Tots.

The Disney Ultimate Toy Drive's mission has one focus: to help make a child's holiday wish come true. To that end, Val and Ryan encourage ABC 7 viewers to drop off new, unwrapped toys at participating IHOP or The RoomPlace locations from Nov. 11 through Dec. 19. The U.S. Marine Corps Reserve will then distribute those toys to less fortunate children in the community.

Toys for Tots Coordinators U.S. Marine Sgt. Yizet Vargas and Marine veteran George Hyman appeared on Windy City Weekend to talk about the impact of the Toys for Tots campaign on Nov. 12. They were joined by Armand Aviles, the district manager with IHOP and Valerie Knight, vice president for marketing with The RoomPlace.

The U.S. Marine Corps Reserve Toys for Tots goal is "to deliver, through a new toy at Christmas, a message of hope to less fortunate youngsters that will assist them in becoming responsible, productive, patriotic citizens."

The following is a suggested list of toys for donation:

Participating The RoomPlace locations include:

For those who can't make a donation at one of the above locations, toy donations can be made at ShopDisney.com until Dec. 24.

About ABC7/WLS-TV Chicago
ABC7/WLS-TV Chicago is the No. 1 local news source and most-watched television station in Chicago. With top-rated daily newscasts spanning decades and the largest social media presence in the market with more than 2.6 million Facebook followers, ABC7 Eyewitness News provides breaking news, investigative reporting, weather, politics, traffic and sports in the multiplatform space to Chicago, the suburbs and northwest Indiana. Named Best News Operation by the Associated Press for four consecutive years, ABC 7 Eyewitness News produces "Chicago Proud," a series of features that spotlights everyday heroes in and around Chicago. The station also produces the highest-rated New Year's Eve special in Chicago, holiday kickoff special "The Magnificent Mile Lights Festival," syndicated to a national audience, as well as the award-winning program series "Our Chicago," which showcases the city's diversity and highlights contributions in the Black, Hispanic, Asian, LGBTQ+ communities, among others. Every Friday, Windy City Weekend, entertains while giving Chicagoans everything they need to know about what's happening in the city. ABC 7 is the only Chicago station producing and broadcasting parades representing Chicago's rich cultural history. In addition to producing town halls focused on current social issues, the station has a long and proud tradition of broadcasting political candidate debates keeping Chicago's electorate informed. ABC7's outreach efforts include annual partnerships with the Red Cross for life-saving blood drives, one of the biggest one-day drives in the country and, most recently, spearheading an effort to raise more than $1.5 million for area food pantries.

About International House Of Pancakes, LLC
For 63 years, IHOP has been a leader, innovator and expert in all things breakfast, any time of day. The chain offers 65 different signature, fresh, made-to-order breakfast options, a wide selection of popular lunch and dinner items as well as meals under 600 calories. IHOP restaurants offer guests an affordable, everyday dining experience with warm and friendly service. Today, there are more than 1,750 IHOP restaurants around the world, including restaurants in all 50 states and the District of Columbia, Puerto Rico and Guam as well as Canada, Mexico, Guatemala, Panama, Lebanon, the Kingdom of Saudi Arabia, Kuwait, the United Arab Emirates, Bahrain, Qatar, Thailand, and India. IHOP restaurants are franchised by affiliates of Glendale, Calif.- based Dine Brands Global. (NYSE: DIN).