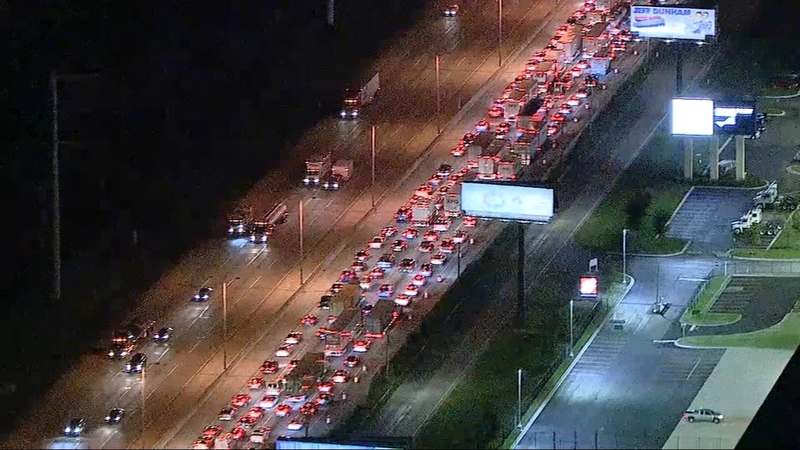 CHICAGO (WLS) -- Motorists on their way to work or trying to catch a flight at O'Hare Airport became stuck in a massive, miles-long backup because of construction work in the northbound lanes of the Tri-State Tollway Tuesday morning

Construction work reduced traffic to a single lane between Irving Park Road and Balmoral Avenue. It was supposed to be picked up by 5 a.m. However, traffic was still moving in a single lane until shortly after 6 a.m.

Check the latest conditions with our live traffic map


Some infuriated motorists pulled some dangerous moves, backing up off ramps to free themselves from the tie-up. Chopper 7-HD flew over the Tri-State as the traffic backed up nine miles, with travel times of up to two and a half hours between the Eisenhower and Kennedy expressways at one point.

One commuter named Natalie told ABC7 it took her over two hours to get from Downers Grove to the city, a drive that should normally take about 50 minutes.

"I have a long commute and I've accepted that, but when it's an hour and a half, you know, two hours, that's ridiculous," she said. "I leave in plenty of time."

According to the Illinois Tollway, The Central Tri-State is being reconstructed from Balmoral Avenue to 95th street to provide congestion relief and reconstruct old infrastructure. The tollway has promised to close lanes overnight and during off-peak hours.

"I don't understand who is making the rules for the construction," Natalie said. "I don't get it why they don't, why there's not more foresight into planning all this."

The Illinois Tollway released a statement saying, "A weather-related materials issue delayed an Illinois Tollway contractor who was putting down temporary lane striping on northbound I-294 near I-90 and I-190.

For safety reasons, that delay forced the contractor to keep 3 lanes closed until about 6 a.m.-about an hour later than was scheduled.

The Tollway is reviewing this situation but does not anticipate these circumstances will reoccur.