WLS
By Chuck Goudie and Christine Tressel and Carleen Mosbach 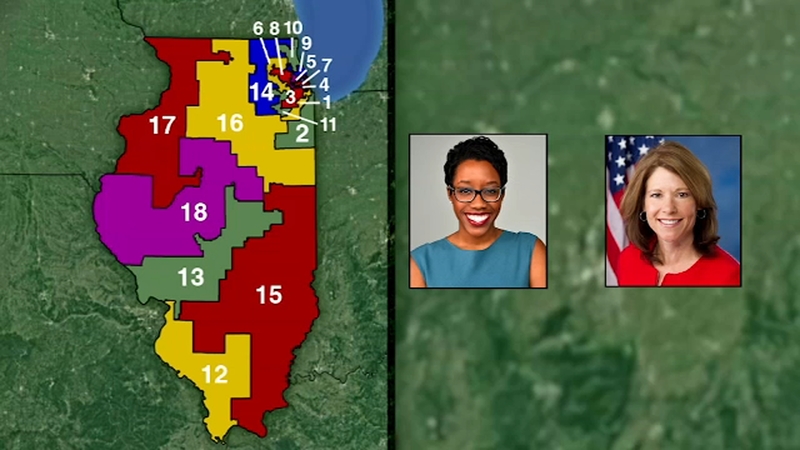 CHICAGO (WLS) -- Even in a sharply divided, partisan Congress, not all Illinois representatives in Washington are publicly committed to or against the impeachment of President Donald Trump.

On Tuesday House Democrats unveiled two articles of impeachment against the president alleging abuse of power and obstruction of Congress.

But an ABC7 I-Team survey of the 18-member Illinois delegation in Congress on Tuesday revealed that several still claim to be weighing their options when impeachment comes to a vote.

Five of 13 Democrats in the House say they are continuing to review the articles of impeachment. Sean Casten, Dan Lipinski, Brad Schneider and Lauren Underwood all from Chicago's suburbs and Cheri Bustos of East Moline did not publicly commit to a vote in favor of impeachment when it occurs as early as the end of this week.

Democrats Bustos and Underwood are both from districts that Donald Trump carried in 2016.

"From the beginning, I have made clear this search for the truth must be fair, evenhanded and unrushed," Rep. Bustos said in a statement to the I-Team. "We have seen the ways President Trump abused the power of his office and today's announcement marks a somber day for our nation. As the work of the Judiciary Committee continues, I will review their findings with the gravity a moment like this demands."

In the first statement from freshman congresswoman Underwood's office since impeachment proceedings began, a spokesperson said late Tuesday that "She is reviewing the articles of impeachment before she comes to a conclusion.''

Rep. Bill Foster, D-Naperville, was the sixth Illinois Member of Congress declining to commit to an impeachment vote, but late Tuesday announced a decision to vote yes.

"I support the Articles of Impeachment against President Trump that have been introduced by the Judiciary Committee, and I intend to vote for them on the Floor of the House of Representatives next week," Foster said. "After careful consideration of the evidence presented over months during the impeachment inquiry, I believe the facts are clear: President Trump abused the power of his office to pressure Ukraine to investigate his political opponent to benefit his re-election campaign. This represents a gross violation of his oath of office and the public trust."

Illinois Democrats interviewed in Washington on Tuesday said they expect the full delegation to come down in the side of impeachment.

"I don't think that very many people came to Washington, especially members of the freshman class ...wanted to engage in impeachment but the facts on the ground is what has driven us to these important actions," said Chicago and suburban Democratic Congressman Chuy Garcia.

Three of five Illinois Republicans in the House responded to the I-Team. They all oppose impeachment; although none accepted our invitation to speak on camera.

They were willing to leave the talking to House GOP leaders.

"It is not difficult to defend this president, because this president did nothing that's impeachable. It's hard to defend Democrats on how they're running this House" said House Minority leader Rep. Kevin McCarthy, R-California.

The three Illinois Republican Members of Congress did release statements on Tuesday.
"Since President Trump was elected, the Democrats have wanted to overturn the election," said Rep. Adam Kinzinger, R-Channahon. "The articles of impeachment drafted today are the culmination of that anti-Trump fever, leaving us even more divided than before. There will be another Presidential election in 11 months and the voters will have the final say, as was designed by our founders. Right now, we need to get back to work for the American people."

"This is a sad day for the future of our country. House Democrats are moving forward with one of the fastest and only partisan impeachment in our nation's history," said downstate Republican Congressman Rodney Davis. "These articles not only say the President should be removed from office, but barred from running again - denying American voters the right to choose for themselves who should lead this country. I will not vote to remove a duly elected president of either party or bar them running without a legitimate independent investigation and proof of a crime, neither of which exist in this case. I will be voting no and hope that we can finally get to work on bipartisan legislation to improve the lives of hardworking American citizens."

"Since the beginning of President Trump's term, Democrats have fixated on undoing the results of the 2016 elections, and it is disappointing, but not surprising, that Speaker Pelosi and House Democrats are barreling ahead with their impeachment obsession" Rep. LaHood said in a statement. "We are ten months away from early voting in Illinois, yet Democrats would rather attempt to overturn the results of the 2016 election than let the people decide in November. Impeachment is the nullification of an election. As a former federal prosecutor, I have seen nothing in the facts or evidence presented so far that supports the high-standard predicate for impeachment."

"The American people didn't send us to Washington to overturn the results of the 2016 election. Instead of working to tear down President Trump, Democrats should work with Republicans to solve problems for everyday Americans," he added.

ABC investigative reporter Chuck Goudie asked Soffer how it can be ensured that there is still an element of American fairness in a proceeding like that?

"We can never be sure," Soffer said. "The constitution trusts that the Senate will do its job they are required under the constitution to take an oath to do their job fairly here in an impeachment proceeding. And a conviction has to occur only with 2/3 of the Senate voting for what's called a super majority. Those are the protections that the constitution gives us with an eye toward making sure it's a fair proceeding.".
Report a correction or typo
Related topics:
politicsimpeachmentdonald trumpi team
Copyright © 2022 WLS-TV. All Rights Reserved.
I-TEAM
Lower Wacker shooting of carjacking suspect caught on video: sources
FBI: QR code scams on the rise
Michigan governor not only original target of militia group: feds
75 years after Al Capone's death, it's not your dad's Chicago Outfit
TOP STORIES
Chicago, NW Ind. could see 6 inches of lake effect snow overnight
IL reports 14,422 new COVID cases, 149 deaths
Lower Wacker shooting of carjacking suspect caught on video: sources
Chicago parents hope some good can come from son's death
PA woman shot by man who followed her home after bump at market: cops
Toddler credited with saving family of 7 from devastating house fire
CPS teacher killed in murder-suicide was active in violence prevention
Show More
Bears hiring Matt Eberflus as new head coach
11-year-old boy charged in Mt. Greenwood carjacking: CPD
2 charged in murder of girl,8, in Little Village denied bond
Laquan McDonald's grandmother calls for Van Dyke to stay in prison
'It felt like virtual reality:' Rhone Talsma opens up on Jeopardy win
More TOP STORIES News