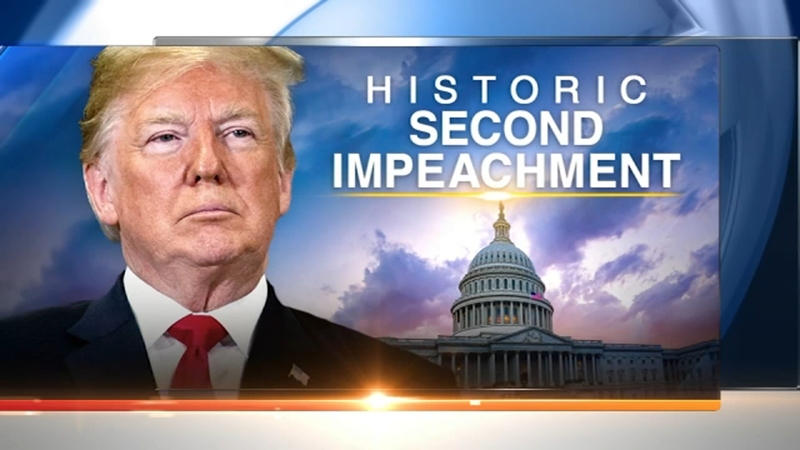 CHICAGO (WLS) -- The Senate has voted to acquit former President Donald Trump of incitement of insurrection in his second trial for impeachment.

Seven Republicans joined all the Democrats in voting that the former President is guilty, however, it was still short of the 2/3 majority needed to convict.

Hours before the final vote the proceedings took a surprising turn.

There was chaos and confusion on day five of Trump's second impeachment trial.

The congresswoman in a statement Friday night said House Minority Leader Kevin McCarthy told her that during the deadly riot Trump told McCarthy that the mob was "more upset about the election theft than you are."

"Needless to say, this is an additional, critical piece of corroborating evidence, further confirming the charges before you, as well as the President's willful dereliction of duty," U.S. Rep. Jamie Raskin said.

Trump's defense attorney warned Democrats that if the impeachment managers called one witness, he would call 100.

"I have the right to defend that. The only thing that I ask, if you vote for witnesses, do not handcuff me by limiting the number of witnesses that I can have," Michael van der Veen said.

But three hours into the proceedings, and after five GOP senators joined Democrats to call witnesses, both sides agreed to call none. Instead, Beutler's written statement was admitted into evidence.

"I asked Kevin McCarthy about this. He said he finally got through to Donald Trump and he said you have to get on TV, on Twitter and call these people off," Beutler said as she recalled the conversation with McCarthy to a local TV station on Feb. 8. "The response to Kevin was chilling, it was, 'I guess Kevin they're more upset about the election theft than you are.'"

The trial then moving into closing arguments.

"Our reputations and our legacy will be inextricably intertwined with what we do here and with how you exercise your oath to do impartial justice," Raskin said.

"It is time to bring this unconstitutional political theater to an end. It is time to allow our nation to move forward," van der Veen said.

As for why the House impeachment managers suddenly abandoned their request for witnesses, sources told ABC News that Democratic senators close to President Biden told the House managers that a delay in the trial could potentially derail Biden's agenda and COVID relief.

Illinois Senator Dick Durbin issued a statement that said, "I wish the Senate had sent an unequivocal message that it is unacceptable for any president to incite violence in order to stop the peaceful transition of power. But it should not be lost that a majority of Senators - including 7 Senators from the President's own party - voted to convict him."

Fellow Senator Tammy Duckworth said, "It is profoundly disheartening that so many of my Republican colleagues chose to ignore the evidence and vote to acquit him...History will not look kindly on their votes to defend a wannabe tin-pot dictator or their willingness to further imperil our notion of a government of the people, by the people and for the people."

Congresswoman Jan Schakowsky said, "Unfortunately, 43 cowards in the Senate blessed the actions of the Trump-inspired mob that put their very lives, and the lives of their colleagues, staff and that of Vice President Pence, in danger that day. It is even more pathetic that Minority Leader McConnell refused to accept the Articles of Impeachment while Trump was still in office, and then today used that as an excuse in his vote to acquit, before going on the floor to concede the House Impeachment Managers won on the facts."

He added that he'll be looking for "alternative options to ensure responsibility and accountability."

ABC 7 Political Analyst Laura Washington weighed in on what may be ahead.

"I want to first thank my team of dedicated lawyers and others for their tireless work upholding justice and defending the truth.

My deepest thanks as well to all of the United States Senators and Members of Congress who stood proudly for the Constitution we all revere and for the sacred legal principles at the heart of our country.

Our cherished Constitutional Republic was founded on the impartial rule of law, the indispensable safeguard for our liberties, our rights and our freedoms.

It is a sad commentary on our times that one political party in America is given a free pass to denigrate the rule of law, defame law enforcement, cheer mobs, excuse rioters, and transform justice into a tool of political vengeance, and persecute, blacklist, cancel and suppress all people and viewpoints with whom or which they disagree. I always have, and
always will, be a champion for the unwavering rule of law, the heroes of law enforcement, and the right of Americans to peacefully and honorably debate the issues of the day without malice and without hate.

This has been yet another phase of the greatest witch hunt in the history of our Country. No president has ever gone through anything like it, and it continues because our opponents cannot forget the almost 75 million people, the highest number ever for a sitting president, who voted for us just a few short months ago.

I also want to convey my gratitude to the millions of decent, hardworking, law-abiding, God-and-Country loving citizens who have bravely supported these important principles in these very difficult and challenging times.

Our historic, patriotic and beautiful movement to Make America Great Again has only just begun. In the months ahead I have much to share with you, and I look forward to continuing our incredible journey together to achieve American greatness for all of our people. There has never been anything like it!

We have so much work ahead of us, and soon we will emerge with a vision for a bright, radiant, and limitless American future.

Together there is nothing we cannot accomplish.

We remain one People, one family, and one glorious nation under God, and it's our responsibility to preserve this magnificent inheritance for our children and for generations of Americans to come.

May God bless all of you, and may God forever bless the United States of America."

"It was nearly two weeks ago that Jill and I paid our respects to Capitol Police officer Brian Sicknick, who laid in honor in the Rotunda after losing his life protecting the Capitol from a riotous, violent mob on January 6, 2021.

Today, 57 Senators - including a record 7 Republicans - voted to find former President Trump guilty for inciting that deadly insurrection on our very democracy. The Senate vote followed the bipartisan vote to impeach him by the House of Representatives. While the final vote did not lead to a conviction, the substance of the charge is not in dispute. Even those opposed to the conviction, like Senate Minority Leader McConnell, believe Donald Trump was guilty of a "disgraceful dereliction of duty" and "practically and morally responsible for provoking" the violence unleashed on the Capitol.

Tonight, I am thinking about those who bravely stood guard that January day. I'm thinking about all those who lost their lives, all those whose lives were threatened, and all those who are still today living with terror they lived through that day. And I'm thinking of those who demonstrated the courage to protect the integrity of our democracy - Democrats and Republicans, election officials and judges, elected representatives and poll workers - before and after the election.

This sad chapter in our history has reminded us that democracy is fragile. That it must always be defended. That we must be ever vigilant. That violence and extremism has no place in America. And that each of us has a duty and responsibility as Americans, and especially as leaders, to defend the truth and to defeat the lies.