Chicago leaders respond to Trump's 'I will send the Feds!' tweet about violence 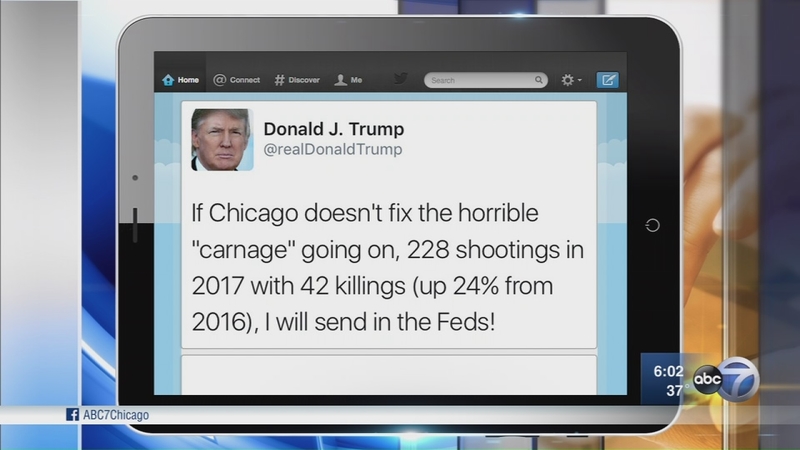 CHICAGO (WLS) -- "Fix the carnage." That's the sharp message for Chicago from President Donald Trump, as he promises federal action on the city's violence problem.

The latest crime statistics from Chicago police show that so far this year, there have been 38 murders and 182 shootings.

In an interview with David Muir, Trump also said two people were killed in the city of Chicago during Obama's farewell speech on January 10. But according to Chicago police, there were no homicides on that day. Police said there were four shootings on Jan.10, but only one occurred in the evening at around 9:18 p.m., after Obama's speech was already over.

This isn't the first time President Trump singled out Chicago. He has tweeted about it before and talked about it on the campaign trail. But this tweet was the strongest and most direct so far.

What exactly he means by "send in the Feds," is unclear. The president did not define whether he meant sending more agents from the FBI, the ATF, the DEA or the National Guard. Many aldermen didn't know what to make of the tweet without more specifics from the president.

"You have a responsibility to measure your words because they carry meaning. The inability for him to understand that issuing threats via tweet is juvenile," said Alderman Ameya Pawar (47th Ward).

"I don't know if he knows what the right approach is and what we really need, so there's concern about that," said Alderman Scott Waguespack (32nd Ward).

If @POTUS is concerned about gun violence in Chicago, maybe he should talk to @VP about all of the illegal guns coming across Indiana border https://t.co/K6jM66eXgb

"We've talked long and hard that policing is not the sole answer here. If they are going to have help, certainly federal support and prosecution. But also making sure that we have jobs programs, that we have infrastructure investment to create jobs. Those are the kinds of things that are really going to help on this issue," Zopp said Wednesday.

"I hope that the federal resources is money, not for a federal agents to go after people, but money to help to employ people," said Alderman Walter Burnett, Jr. (27th Ward).

Chicago Mayor Rahm Emanuel said the federal government can help, especially when it comes to working on gun control.

"I would welcome...federal participation in working with law enforcement to deal with guns and gangs," Emanuel said.

"I think the mayor made it very clear that we welcome federal help in a number of critical areas, like jobs, like most importantly, supporting federal prosecution. The U.S Attorney's Office here has the lowest number of gun prosecutions compared to Gary, Baltimore, cities across the country. We would use that help and support," Zopp said.

"As the mayor just said a few hours ago, the Chicago Police Department is more than willing to work with the federal government to build on our partnerships with the DOJ, FBI, DEA and ATF to boost federal prosecution rates for gun crimes in Chicago."

Father Michael Pfleger of St. Sabina Church has been very outspoken in the community, especially when it comes to gun violence. He said sending the National Guard is not the solution to the surge in violence.

"Well I get very concerned when Donald Trump just comes out with statements and tweets. What do you mean? You never come to Chicago. You've never talked to people to say, 'What do you see is the problem? What are the needs here?'" Pfleger said.

Father Michael Pfleger of St. Sabina Church has been very outspoken in the community, especially when it comes to gun violence.

"The biggest thing that we have to invest in is human capital," said Jonathan Todd, a resident of Chicago's Austin neighborhood. "We haven't done that in 20 plus years."

The social worker and longtime Austin resident said he welcomes almost any kind of federal help, as long as it means the National Guard will stay out.

Sandifer has worked and attended church in Austin for more than 25 years and said any efforts by the Trump administration should be concentrated in bringing jobs to the community.

"I think if we were educated and had access to resources that we need that the crime rates would go down," said Sandifer.

The Chicago Police Department statistics show that Austin is one of the most violent neighborhoods in the city. In December, the West Side community ranked 14th among the city's 77 community areas for violent crime reports.