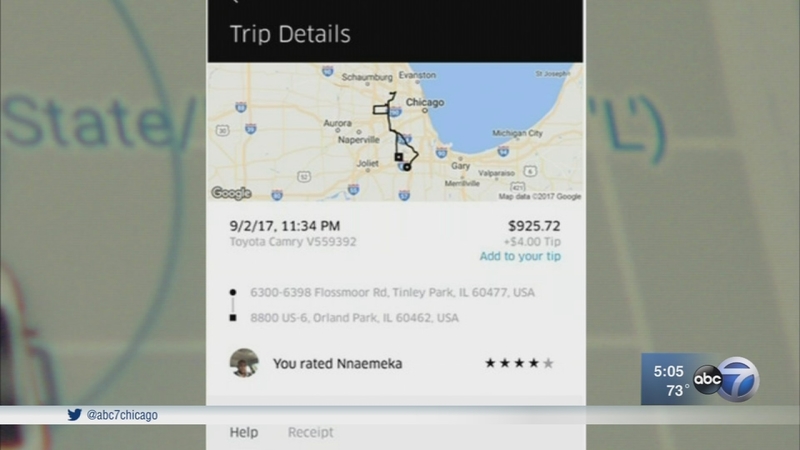 Would you pay $925 for an Uber ride? One woman turned to the I-Team after she says she was charged almost eight times the regular rate.

It was one of her first times using Uber and she said she had no idea that the app was charging what's known as a "surge rate" during peak demand.

In this case, that surge was unusually high, adding up to $925.

Michelle Fox was talking about her Uber ride.

For the same price she could have flown roundtrip to London or Paris, almost enough to get a new iPhone X.

Jason Knowles: "So you're saying that you did not agree to pay almost eight times the rate?"
Michelle Fox: "I absolutely did not."
Jason: "You wouldn't pay $900 for a ride?"
Fox: "I would never pay that much"

Fox, a first-time user says she never agreed to that surge fee which goes into effect during peak times.

She and her friend Melissa Tijerina were recently leaving a concert in Tinley Park when they called an "Uber X," Uber's "low cost" option.

They drove about 100 miles, but even that long ride, not on surge, would have normally been $117.

Jason: You went from Tinley Park back to O'Hare back to Orland Park.

Fox: "That's what they wanted to do and the driver agreed to drop them off first. That's just how it ended up working out."

Uber said when users request a ride, they're alerted about surge charges and must agree to them through the app.

Fox: "And then I contacted Uber and said this was a really strange charge. The only way to contact them is through the app. There's no resolution to this, this is literally like I feel robbed."

But when the I-Team called Uber, Fox received a full refund.

Fox: "I felt so strongly that that had to have been a mistake."

On the phone, an Uber spokesperson told the I-Team it was a "perfect storm" of confusion which occurred partially because Fox changed her destination and added the O'Hare stop to the trip after her Uber arrived.

Uber said: "We have refunded the rider for the charges related to her ride including the additional 93 miles she added to the trip. We are proud to provide safe, reliable rides for all Chicagoans and encourage riders to input all desired stops into the app upfront to receive a correct fare estimate."

Fox: "I mean I feel like this really could happen to anybody."

If you're a new Uber or Lyft user, you should pay close attention to the apps when requesting a ride.

Rates can skyrocket if you're using ride share during bad weather or after a popular event.