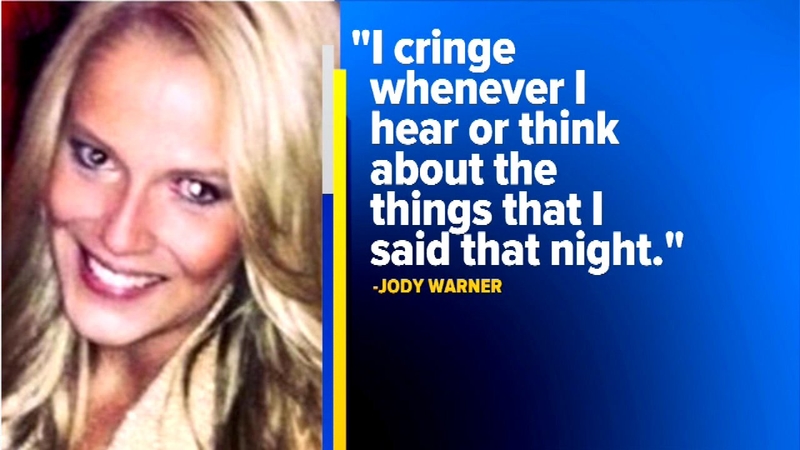 "Oh my God, you're an idiot. You are a legitimate (expletive)," Warner said in the recording. "You're so stupid. I want the cops to come so that they can (expletive) you up."

Shaun Platt, the Uber driver, was driving Warner home from a bar Friday night when she became upset about directions and began threatening him.

Platt: "Ma'am, please."
Warner: "No, 'Ma'am, please.' Dude, everything is being recorded. I'm an assistant district attorney, so shut the (expletive) up."

Platt said he pulled over and asked her to get out of the car. When she refused, he called the police.

Platt: "I'm asking you politely to please step out of my vehicle."
Warner: "No, because now I am pissed the (expletive) off."

Platt said Warner hit him and accused him of kidnapping her.

"I think this might be kidnapping right now, actually," Warner said in the recording.

"She actually hit me. It was not how I expected the night to go," Platt said. "She kept saying she's an assistant DA and said, 'Who are they gonna believe? You or me?' I said, 'You know what? You're kind of right.' So I took out my phone and I recorded it."

When the cops arrived, Platt said he declined to press charges.

"I'm used to dealing with drunk passengers on a consistent basis," Platt said. "I forgive her."

But Warner's employer was not so forgiving. The Dallas County District Attorney's Office fired her late Monday.

"Her behavior is contrary to this office's core principle of integrity" the office said in a statement.

"I'm sorry it cost her her job. That was not my intent. But you don't treat people that way," Platt said.

Overnight, Warner denied she ever hit Platt. But she expressed regret and called her behavior "unacceptable."

"I cringe whenever I hear or think about the things that I said that night," Warner told ABC News. "The audio doesn't tell you that I was in a situation that made me feel very uncomfortable."

Warner spoke Tuesday about the incident, saying she is sorry for what was said and that she was in the wrong.

The former ADA apologized for the language she used, but denied Platt's claim that she hit him.

Warner said he took a route home she wasn't aware of and she became scared.

Warner has worked for the district attorney's office for six years as a prosecutor in crimes against children.