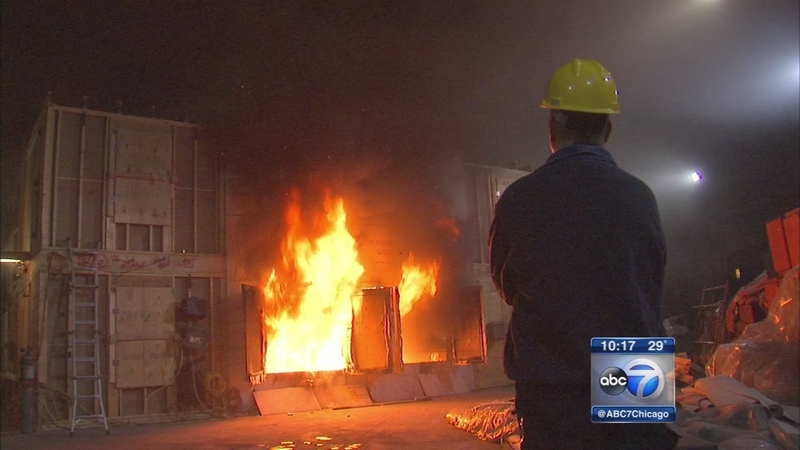 NORTHBROOK, Ill. (WLS) -- The ABC 7 I-Team looked into a cutting-edge experiment that could save the lives of firefighters and homeowners.

The American Red Cross says that only one out of every 10 households is prepared for the worst, and has a fire escape plan. New global research is being done locally that can help firefighters save homes, and themselves.

As flames rage through these 2 "homes", researchers at Underwriters Laboratories in Northbrook are monitoring the oxygen levels and temperatures. It's all to reduce the number of people killed in blazes.

About 150 sensors are strategically placed around both homes, which are inside a UL warehouse. Firefighters from around the world are here to witness new potential techniques, which firefighters say are desperately needed.

"A lot of tactics are coming in question because while the number of fires are going down the number of deaths are remaining the same we are hurting ourselves," said Mike Halterman, a firefighter and paramedic in Wilmette.

Not only are those firefighter deaths concerning, but so is the new speed of fires. In October, the I-Team and the Alsip Fire Department showed you why they're now faster - because of newer construction, open floor plans and newer furnishings.

Now, UL Consumer Safety Director John Drengenberg and his team are testing what's called "positive pressure ventilation". They'll still need to perform several more tests and get more data but, they're trying to figure out if opening certain windows and increasing airflow to the fire with fans, can manipulate the flames.

"In this case it looks like if the house was vacant and nobody was in the house, the fan would have done a good job of helping to get the smoke out and letting in the firefighters come in and attack the fire which was in the living room. However if there was someone in the house, especially in the bedroom, with the window open it could have been disastrous," Dregenberg said.

And it's the smoke that kills first. Besides having working alarms, you need to shield yourself from smoke, while you're sleeping. Sleep with your bedroom door closed. If there is a fire and you need to get out, put the back of your hand on the door first to make sure it is not too hot before you escape."

And when you are exiting, you should crawl below the smoke and have a special safe meeting place for you and your family.

"This is data that is ground breaking. Nobody has ever done this firefighters are on scene they know how to fight a fire but nobody knows how the fire progresses and they might want to change their tactics if some of these data points show maybe breaking the window to get at the fire may not be the best thing," Dregenberg said.

UL's research will be complete in a few months. They are doing about 20 more test burns.

To prevent fires from spreading quickly you should limit the number of items you have in smaller rooms and make sure you have a clear path to your doorway.

There's also a growing number of people now installing sprinklers. It adds 2 percent more on new construction, but much more in existing homes.