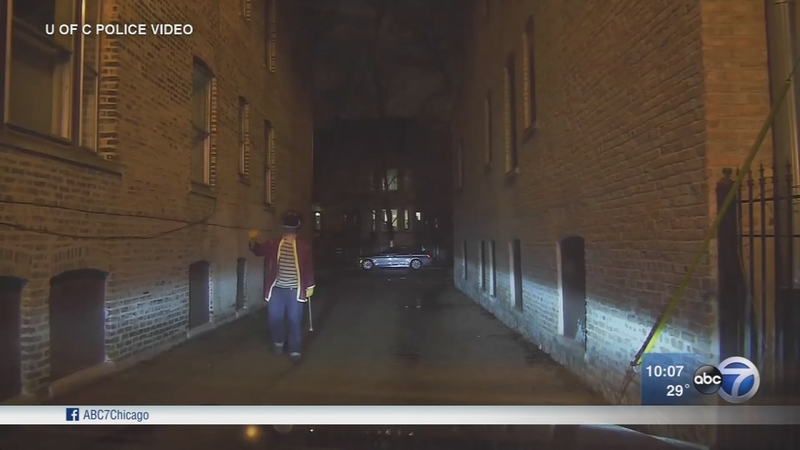 Student shot by U of C police, video released

CHICAGO (WLS) -- A student was wounded by University of Chicago police Tuesday night in Hyde Park. Witnesses said the man was screaming and yelling, smashing windows and cars.

Several residents called police to stop him and ultimately, the man was shot in a nearby alley.

In the dash cam video, police are seen pulling up to the suspect, who refuses to comply with their commands. The suspect has his face covered with some sort of shield, is holding a metal bar and is wearing yellow gloves.

Witnesses described the man as angry and unpredictable as he vandalized several cars and a glass apartment door with the metal bar.

A student at the University of Chicago was shot by a university police officer Tuesday night.

"I heard a really loud banging noise right outside of my door and I looked out the window and saw this guy with a really long pipe or baseball bat, something really long, just going after cars. He was smashing the car right next to my car, so I got my phone and was about to call police when he went across the street and started smashing another car and by the time I was on the phone with police, I could see he was banging down one of the glass doors of the apartment building right next to my house. He was yelling something. It was pretty incoherent, but it was really scary," said witness Sylvie Anglin.

The University of Chicago said three of its police officers responding to a reported burglary confronted a man at about 10:12 p.m. in the 5300-block of South Kimbark Avenue.

The officer fired and the student was wounded in the shoulder, the university said. He was rushed to Northwestern Memorial Hospital in serious condition.

The university said the officer that fired has been on the University of Chicago police force for two years and has undergone 40 hours of crisis training, including mental health training.

In cellphone video recorded by a neighbor, screams can be heard along with a single gunshot fired.

"He started yelling and they were asking him to put down the bat and at some point I heard what sounded like a gunshot," said witness David.

The University of Chicago is conducting an internal investigation into the shooting.

Dwight Reed lives in the neighborhood. He's not surprised that the incident ended in gunfire.

The Chicago Police Department is now investigating his use of force and if it was justified. The university said the campus officer is now on mandatory leave pending the outcome of the investigation.

The University of Chicago President Robert Zimmer and Provost Daniel Diermeier released a statement saying:
"We are writing to provide an update on an incident that occurred near campus last night. This is a difficult incident for our community, and our concern is with all of the individuals involved and their families.
At approximately 10:12 pm, University of Chicago police officers responded to a call of a burglary in process in the Hyde Park neighborhood in the alley between South Kimbark Avenue and South Woodlawn Avenue near 53rd Street. Three officers arrived at the scene and encountered a young male individual with a long metal pipe, breaking car and apartment windows. Upon arrival, following protocol, the officers demanded that the individual drop the pipe.

The individual ignored the officers' repeated requests to drop the pipe, and at one point charged an officer with the weapon. At that time, the officer discharged his weapon, striking the individual in the shoulder. After the incident the UCPD learned that the individual is a student at the University of Chicago. The student's parents have been contacted.

The student was transported to Northwestern Memorial Hospital and was last reported to be in stable condition. The Chicago Police Department will be investigating the incident. In addition, the University Department of Safety and Security will conduct an administrative investigation. Under police department protocol, the officer has been placed on mandatory administrative leave pending the outcome of the investigation. There is body camera footage of the incident, which will be released to the media as soon as feasible.

Maintaining our community's safety, security and well-being is of paramount importance. Support services and resources for students will be provided by the College and Campus and Student Life. The University will release additional updates as more information becomes available."