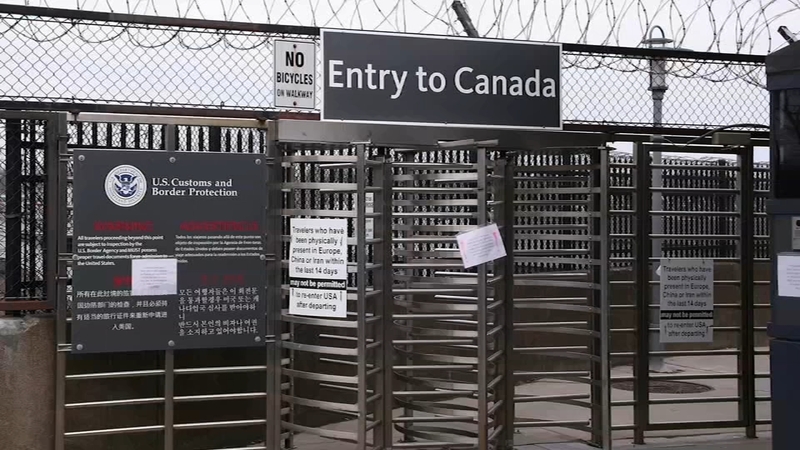 CHICAGO (WLS) -- There's hope COVID-19 travel restrictions will soon be eased between the U-S and Canada.

Both countries are restricting who can travel across the border, despite growing vaccination rates.

It all comes as the White Sox play the Toronto Blue Jays Tuesday night during a during a big vaccination effort at Guaranteed Rate Field.

In support of Major League Baseball's "Vaccinate at the Plate" initiative, the Chicago White Sox and Cook County Health announce additional pop-up vaccination events at Guaranteed Rate Field during the series against Toronto.

Pressure is mounting from community groups organizing on Facebook, to politicians pushing to allow non-essential travel once again, nearly 15 months after it was closed to prevent the spread of of the coronavirus.

That move separated families for longer than many imagined including an Elgin resident whose partner lives in Toronto.

"We are just asking for compassion and community and support we don't want to go be tourists we want to go see our families," said AJ Draper.

Exemptions obtained from the Canadian government through a convoluted process have allowed some American family members to cross the border. But they must still quarantine for 14 days on the Canadian side. That makes visits practically impossible.

"It is just not realistic when you were working if you have kids and some people are separated literally five minutes over the border so it is super frustrating for them," said Draper. "My girlfriend can't afford to go back to Canada in quarantine for 14 days."

A loophole in American regulations allows Canadians to come to the states but by air only. That's what Mike Simoes did to be with his Hinsdale spouse, who is now with him in Chatham, Ontario

"We are in love and we just want to live in the same country which can be challenging enough but then throw in a global pandemic," said Taylor Marsh. "We were separated for just over 100 days."

With little hope of a quick resolution, the couple wed in a civil ceremony in Lincoln Park last summer but their plans to build a life together in Chicago are on hold.

This week the Canadian government made an exemption for NHL players to cross the border for the sake of the NHL playoffs. Yet Canada's Prime Minister Justin Trudeau has said the border won't open until 75% of Canadians are vaccinated.

"If they can make exemptions for hockey players, why can't we be with each other," said Marsh.