US to withdraw 12,000 troops from Germany 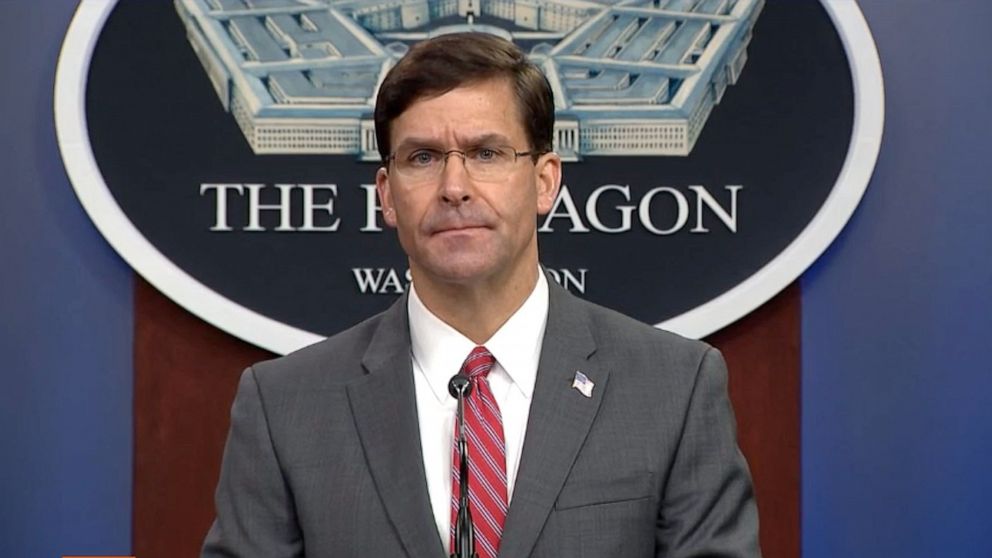 The United States is removing nearly 12,000 American troops from Germany and will move the headquarters of U.S. European Command from Germany to Belgium in a major repositioning of forces that the Pentagon says is intended to increase the deterrence of Russia but that President Donald Trump said on Wednesday was tied to Germany not spending enough on its defense budget.

Of the U.S. troops stationed in Germany, 6,400 will return to the United States. Another 5,400 will be moved to other locations in Europe that already house American troops, and troops from the U.S. will rotate into locations in southeastern Europe -- strengthening NATO's presence in that part of the region.

"The alliance will be all the better and stronger," Defense Secretary Mark Esper said in announcing the changes at a Pentagon news conference on Wednesday.

Esper announced that 11,900 U.S. military personnel will leave Germany, reducing the American troop presence there from 36,000 to 24,000. The U.S. has maintained mostly Army and Air Force service members in Germany since the end of World War II and continues to use its facilities as a major hub for troops stationed in other locations overseas.

"Nearly 5,600 service members will be repositioned within NATO countries and approximately 6,400 will return to the United States, though many of these or similar units will begin conducting rotational deployments," Esper said.

The troop moves will include moving the headquarters of U.S. European Command from Stuttgart, Germany, to Mons, Belgium, where it will be co-located with NATO's military headquarters.

"This will strengthen NATO and improve the operational efficiency and readiness of over 2,000 service members in these headquarters," Esper said.

Gen. Tod Wolters, the head of U.S. European Command and NATO's Supreme Allied Commander, said a proposal was also being considered to move the headquarters of U.S. Africa Command to another location in Europe.

The troop adjustments in Germany are the largest in almost a decade and while the Pentagon is framing the troop reduction in the context of improving the deterrence against Russia in Europe, Esper acknowledged that the move was "accelerated" by new guidance from Trump in June calling for a troop reduction.

That guidance surprised European allies and seemed tied to Trump's displeasure that Germany does not contribute 2% of its Gross Domestic Product (GDP) toward its defense, a goal of NATO countries.

On Wednesday, before departing for a trip to Texas, Trump directly linked the move of troops out to Germany's defense spending.

"We're reducing the force, because they're not paying their bills. It's very simple. They're delinquent. Very simple," Trump said.

"Germany is not paying for it," Trump added. "So why should we leave them if they were not -- we don't want to be the suckers anymore."

Asked about Trump's comments, Esper reiterated his belief that Germany should put 2% or more of its spending toward defense needs to meet the NATO standard.

"I think Germany is the wealthiest country in Europe, Germany can and should pay more to its defense," said Esper, reiterating his previous stance on the subject of Germany's defense spending levels. "It should certainly meet the 2% standard and I would argue go above and beyond that."

NATO Secretary General Jens Stoltenberg said in a statement that the U.S. plan "underlines the continued commitment by the United States to NATO" and that the U.S. had consulted with all NATO allies ahead of the announcement.

Meanwhile, the German Defense and Foreign Ministries issued a bland statement noting the announcement and that Germany "will coordinate closely with the federal states concerned, the U.S. government, and within NATO with a view to further implementation."

Last week, Sen. James Inhofe, R-Okla., the chairman of the Senate Armed Services Committee, said in a statement that he was satisfied with the plans he had been briefed on ahead of time, but criticism of the planned move of forces has crossed party lines.

Sen. Jack Reed, D-R.I., the ranking Democrat on the committee described the move as "a self-inflicted wound by President Trump against American interests" and "an irrational and ill-conceived proposal." Reed also said the plan was not based on a strategic rationale and could embolden Russia's ambitions in Europe.

The top Democrat and Republican on the House Armed Services Committee both criticized troop levels that they perceive to be "arbitrary."

Rep. Adam Smith, D-Wash., expressed concerns that the plan would strain relationships with European partners and is "based on an arbitrary cap imposed on numbers of forward-stationed U.S. forces in a given country, rather than an underlying analysis of military need and national security justification."

Rep. Mac Thornberry, R-Texas, said that while some of the plan has merit "other aspects -- such as an arbitrary limit to the number of troops stationed in certain countries -- remain troubling. "

Calling the plans "a grave error" and a "gift to Russia" Sen. Mitt Romney, R-Utah, was among those Senate Republicans who said it would embolden Russian aggression.

"It is a slap in the face at a friend and ally when we should instead be drawing closer in our mutual commitment to deter Russian and Chinese aggression," he added.

"We should be leading our allies against China and Russia, not abandoning them," said Sen. Ben Sasse, R-Neb. " Withdrawal is weak."

Wolters said the movement of troops out of Germany will afford NATO greater flexibility and reach in northeastern and southeastern Europe.

"The flexibility it affords us certainly complicates a potential enemy against us, and it dramatically improves our operational capability," Wolters said.

Soldiers numbering 4,500 from the Army's Second Cavalry Regiment, an armored Stryker unit, will return to the United States, but other Stryker units will rotate to the Black Sea region of Eastern Europe.

Esper said the move would give the United States "a more enduring presence to enhance deterrence and reassure allies along NATO's southeastern flank."

An F-16 squadron is also being moved from Germany to Italy, most likely to Aviano Air Base which is home to other F-16 units, to also boost the presence in southern Europe.

There is no total price tag associated yet with the planned moves, though Esper estimated that the costs could be less than $10 billion.

While some of the moves could begin quickly, a senior defense official told reporters that the whole process could take years as some construction will have to be undertaken both stateside and overseas to accommodate the movement of forces.

"The plan to remove our troops from Germany will be at the detriment of our national security interests," said Mick Mulroy, an ABC News contributor and a former deputy assistant secretary of defense for the Middle East. "It will cost billions, it will drive a wedge in NATO and it will be a gift to Russia."

Mulroy said that at a time when Russian intelligence is alleged to have run a bounty program to target American troops in Afghanistan, the U.S. "should be looking at ways to sanction them."