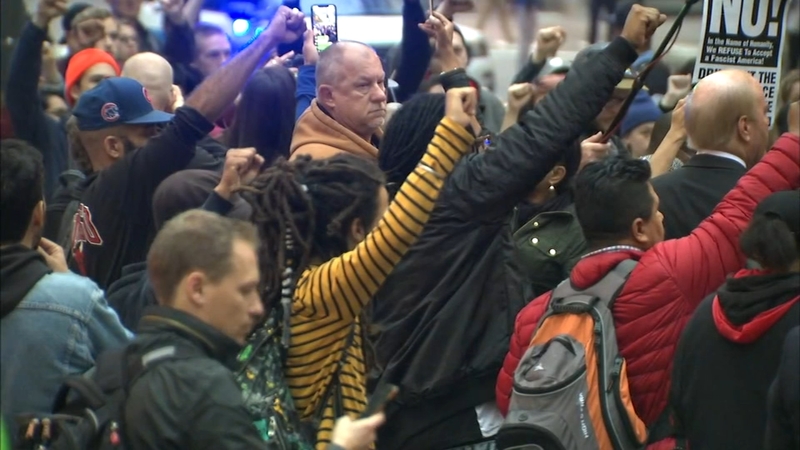 Loop streets re-open as peaceful demonstrations end; CPD says no arrests were made

CHICAGO (WLS) -- A group of demonstrators gathered outside the courtroom Friday as Jason Van Dyke was found guilty of second degree murder in the death of Laquan McDonald.

Demonstrators took to the streets after Jason Van Dyke was convicted Friday.

Van Dyke was also found guilty on 16 counts of aggravated battery with a firearm, one count for each shot fired at McDonald. He was found not guilty of official misconduct.

At approximately 4 p.m., protesters had reached Michigan Avenue and headed north, blocking traffic. Police prevented the demonstration from moving farther north than Wacker Drive. The crowd then went west on Wacker toward Wabash Avenue and stopped outside Trump Tower.

Demonstrations stopped all traffic at the intersection of Ontario and Michigan Friday.

At 5:15 p.m., the demonstrators had stopped all traffic at the intersection of Ontario and Michigan Avenue and chanted, "It does not stop here."

FACE OFF - Protesters make their way to Michigan Avenue and are headed northbound now. Police let them through this line. #VanDyke #VanDykeGuilty pic.twitter.com/ci0P1xYI9V

As of 6 p.m., the demonstrations had largely dissipated. CPD officials said the nearly four-hour protest was peaceful and there were no arrests.

CPD officials said Friday's demonstrations were peaceful and resulted in no arrests.

Earlier in the afternoon, a group praised the jury for the verdict. Some said that although previous statements indicated they would not be satisfied with less than a first degree murder conviction, they were satisfied with the decision because each count of aggravated battery carried a minimum sentence of six years behind bars.

Other demonstrators expressed frustration that Van Dyke was not convicted of first degree murder.

Outside city hall, a group of demonstrators chanted "16 shots," which was met with the response, "guilty."

Protesters outside City Hall shouting “we did it” after Officer Van Dyke is found guilty of 2nd-degree murder. pic.twitter.com/0CuXRij8zy

Protesters have now descended on City Hall and are marching around it. They’re almost appears to be a festive atmosphere in their ranks @ABC7Chicago pic.twitter.com/wdr0sT1v87

Demonstrators said they hoped to see Van Dyke go to prison for the rest of his life.

"It means for me that I can go back home and talk to my son about what Chicago is trying to do to hold police officers accountable...I'm happy for Chicago that they came up with that verdict," one mother said.

In preparation for reactions to the verdict, Chicago police were scheduled to work 12-hour shifts and days off were cancelled.

Alderman John Arena of the 45th Ward said many police officers live in his ward and that he believed the verdict was fair.

"I think the majority of officers are part of the justice system, and hopefully they see this as the process was fair, it was lengthy...If we accept that the system works, then this is a fair decision," Arena said.

"For the past several weeks, a jury heard testimony, weighed evidence and considered the facts of the Van Dyke case. Today, the jury reached its verdict. As we absorb their decision, let us continue to hear each other and partner with each other - as public servants, police and members of the public - and let us ensure our collective mission is what endures for generations to come. We come from many neighborhoods, many walks of life and many places throughout the world. But for all of us, this is our home. This is the city we love. We have heard that message countless times in recent days and weeks in church basements, in community meetings and from residents in our neighborhoods. And while the jury has heard the case and reached their conclusion, our collective work is not done. The effort to drive lasting reform and rebuild bonds of trust between residents and police must carry on with vigor."

Governor Bruce Rauner tweeted in response to the verdict, asking the public to respect the jury's decision.

In the Van Dyke trial, 12 jurors reviewed the evidence and rendered their verdict. We should all respect their decision. Now is the time to move forward as a community.

In a statement released Friday, the Illinois Fraternal Order of Police expressed anger at the jury.

"This is a day I never thought I'd see in America, where 12 ordinary citizens were duped into saving the asses of self-serving politicians at the expense of a dedicated public servant. This sham trial and shameful verdict is a message to every law enforcement officer in America that it's not the perpetrator in front of you that you need to worry about, it's the political operatives stabbing you in the back," the statement read. "What cop would still want to be proactive fighting crime after this disgusting charade, and are law abiding citizens ready to pay the price?"

Kevin Graham, president of the Fraternal Order of Police, held a press conference after the verdict was read.

"What it says is we don't understand the job and sacrifice you make," he said of the verdict. "Things in the city will be calm tonight, and we do think that Jason has a tough road to go, but he is not standing alone. The Fraternal Order of Police is standing with the officer."

Graham added that all CPD officers he had spoken to did not believe that Van Dyke should have been convicted.

The ACLU of Illinois released a statement Friday that called for continued work to reform CPD practices. The statement read:

"Jason Van Dyke has been held accountable by a jury for shooting Laquan McDonald 16 times and unnecessarily killing him. Laquan McDonald should still be alive today. We continue to grieve for the McDonald family and broader community, which lost this young man too soon. We also remember the many families who have lost loved ones to excessive force by police officers who have not yet received justice. This burden falls disproportionately across the City-96% of people shot by the Chicago police are Black or Latinx. No one believes that the conviction of this individual officer repairs the problems in policing - not in Chicago nor in our country. While Mr. Van Dyke will face accountability for his actions, it is critical that the rest of us do not yet look away from the Chicago Police Department. In the aftermath of this verdict, no community should suffer abuse or neglect. The ACLU of Illinois remains committed to working with our community partners to mend the broken system that has allowed excessive force to happen and made the kind of accountability we see today so rare. We must continue to follow through with the reforms of the CPD that the video of his actions helped catalyze, and which must bring systemic change to how police officers serve Chicagoans."

"Today we had justice for Laquan McDonald, and a score for justice in Chicago, we thank God for the victory! We are praying for the family, for the conscious of the jury, and for all those that marched, protested, and fought for this victory. Let us celebrate today. We need a win, because tomorrow the fight continues.

We must bring reform to the police department and to the justice system. Tomorrow we continue to fight to bring equality, equity, and justice to the south and west sides of Chicago. We also put on notice all elected officials that our vote cannot be bought, but must be earned by proposing and delivering concrete ideas, policies, and actions to equal the playing field in Chicago and ending the tale of two cities."

Reverend Jesse Jackson also issued a statement Friday and called for the officers who aided in covering up the shooting to be punished.

"The evidence was overwhelming, and the jury rendered a measure of justice. But Van Dyke should not suffer this alone. Those who covered up the tapes for 400 days should take some responsibility. Those police officers who lied on the scene should be punished. The role of the Fraternal Order of Police should be investigated<" Jackson wrote. "Yet this is no time to celebrate or to rebel. There were police killings before Laquan's murder and there have been police killings since. We must challenge the system to end this egregious behavior toward young black people. Going forward, the name and fate of Jason Van Dyke should be a deterrent for police officers in Chicago and across the country."

Mayoral candidate Bill Daley called the verdict a "new beginning" for Chicago and called for a re-commitment to the safety of the city.
"This brings to an end a tragic, painful episode in our history but must also mark a new beginning for our city," Daley said in a statement released Friday. "This is a moment when all of Chicago needs to come together, work to rebuild trust between the community and police and re-commit to making every neighborhood safer and stronger."

"This is a significant milestone in Chicago's history. Going against a national trend in which juries almost always acquit on-duty police officers on criminal charges, this jury found the evidence powerful and compelling-as have so many Chicagoans in the years since Laquan McDonald's tragic death. I commend members of the jury for doing their civic duty in such a difficult environment," Lightfoot's statement read. "I hope that this decision marks not just a milestone, but a turning point as well. We must pray for Laquan McDonald and his family, and for all those in our city who have been affected by trauma and violence, and we must all work tirelessly to build a Chicago where all can find justice and peace."

Mayoral candidate Dr. Willie Wilson released a statement Friday that supported the jury's decision and called for any demonstrations to remain peaceful.

First, my prayers go out to both the McDonald and Van Dyke families," Wilson said in his statement. "This is a tragedy. The McDonald family lost their young son, a brother and his potential snuffed out, never to be known. Justice has been served...Allow your voice to be heard. Express your opinion. Hold your protests. In it all, I call for EVERY action to be peaceful, respectful and non-violent expression. I call on law enforcement to show restraint, respect and not to show any forms of retaliation at this time. We need hope for our city and we need change."

"Today our legal system did its job. A jury rendered a verdict that held Officer Jason Van Dyke accountable for the murder of Laquan McDonald. The tragic events of that fateful night tore our City apart. Yet even in its darkest moments, Chicago, a city of grit and resolve, of faith and family, has shown its ability to come together, heal its broken heart, and move itself forward. We need each other today, more than ever before; to stand together as one family, all of us, and work to heal our great City. Now is the time for us to focus on rebuilding the trust between police and communities, which has been broken for decades. Lastly I want to express my sincere condolences to the family of Laquan McDonald and hope that today's verdict can help bring them some peace and justice."