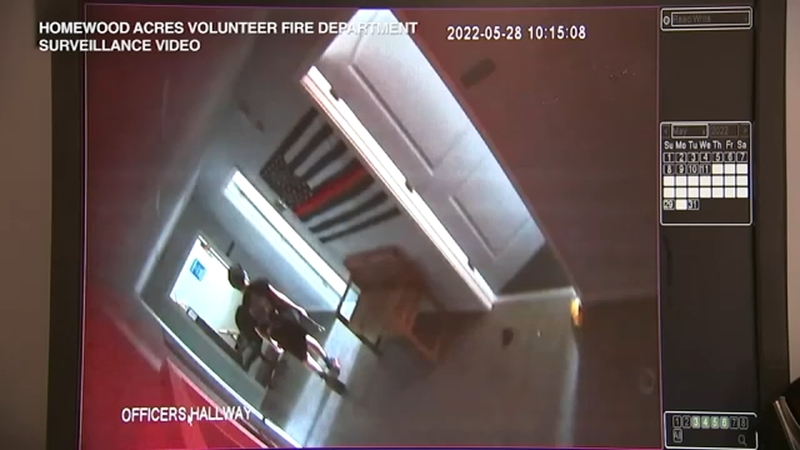 HOMEWOOD, Ill. (WLS) -- Surveillance video shows four juveniles breaking into a fire station in Homewood Acres and vandalizing it over the holiday weekend, causing hundreds of thousands of dollars in damages.

Beyond the glass and destroyed equipment, the stench of the ketchup, mustard and salad dressing smeared on the walls still lingers.

The destruction seems to serve as a sign of fury in the vandals, who were caught on surveillance video breaking into the volunteer firehouse Saturday morning, where they spent four hours breaking everything in sight.

"Total disruption is the best way I can describe it. It is like the Plainfield tornado all over again, everything was just trashed," said volunteer firefighter Lieutenant Joe Rutkiewicz.

One boy tries to break a camera but causes it to drop into the light, shedding color on their activities.

"This is like coming into your own home and seeing this," said Jesse Matthews, an EMT at the firehouse.

The volunteer firefighters train here at least two nights a week after their day jobs.

"Laughing amongst ourselves, hanging out," he recalled. "And we have dinners together. We are always out here telling stories and talking shop."

Two young boys, who were later joined by a pair of others, broke in around 9 a.m. Saturday. Video shows them taking hammers to the place, with expletives on the walls left behind on the walls.

Officials believe the vandals ranged in age from about 9 to 14.

"It is like they had total immunity to do as they please. What kind of life are you going to live down the road if you were doing this at a young age? And what kind of parents are they going to be," said said Chief Bryan Rouson.

When asked what jumps out as particularly obnoxious in this incident, Matthews said, "The chief's office. It seems like they spent the most time in there."

"A lot of memories you cannot see in this room, we've got them up here," Rouson said. "We know them but when you see the stuff that has been destroyed -- desecrated, that hurts."

One item particularly galling to these public servants is a 9/11 memorial made from material that fell from the twin towers that was smashed and smeared with ketchup.

"That is sacred ground for us in the fire service. The juveniles would not know that," Rouson said.

Cook County Sheriff's deputies are investigating the break-in. However, judging by the video, in which ABC7 has hidden the faces because these are uncharged juveniles, officials believe identification is possible.

"When this kind of thing happens, whether it's to us or anybody, it really puts a damper on that and it makes it hard for us to help the people who need us," said Lieutenant Tom Gandurski.

There's insurance to cover some but not all of this damage but adjusters estimate the loss at $100,000 or more.

"I think it has to sink into them what they did and how many people are affected," Rouson said, "And with the amount of attention coming to this, I think it's going to open up a bigger dialogue the adults have to be adults and the parents have to be parents."