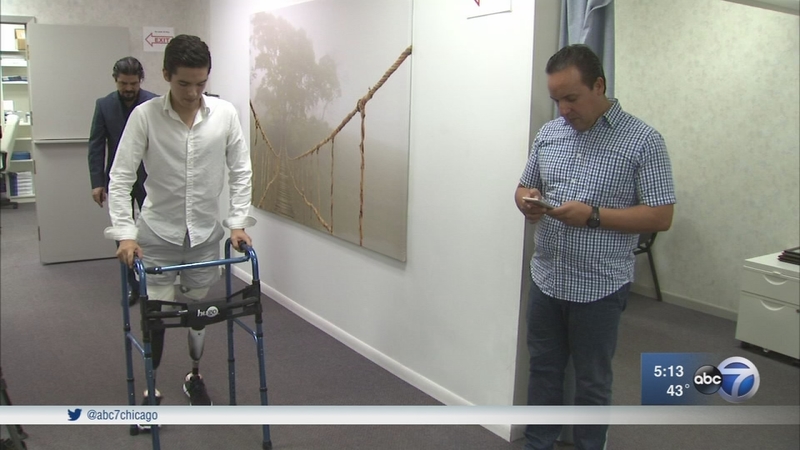 CHICAGO (WLS) -- After losing both legs in a crash Vidal Lopez was told he would never walk again. But a prosthetist in northwest Indiana changed that outlook.

A few months ago the 19-year-old didn't think he would live let alone walk. It's been a roller coaster ride that started in a small city in central Mexico. He's now hopeful and is starting to take those first few steps towards recovery.

"It was a real miracle to be here talking again," Lopez said.

Standing on two feet, without any support, was just one more of many firsts in this teenager's life. Four months ago Lopez was just like any other 18-year-old. Living in Mexico with his family his summer holidays over, he was a week away from starting college when a devastating car crash changed his life forever.

"The doctor said we did our job but he's in danger," Vidal Lopez Sr. said.

Doctors in Mexico had to amputate one of Lopez's legs but with his condition worsening and unable to receive the level of care he needed, his parents decided it was time to come back to the Chicago area, where most of their family lives to give their son a fighting chance.

Once in Chicago, doctors at Rush had to amputate Lopez's other leg simply to save his life. It was not long after a prosthetist told him he'd never walk again. But his family refused to give up. That's when they found Indiana prosthetist Vikram Choudhary.

"You encourage them to the max and then, if it doesn't work, it's a different story. But they started out by saying he'd be Superman if he ever walked," Choudhary said.

Working together for about a month now as they try to get just the right fit, Lopez is flourishing. He is now able to use his prosthetic legs to take a few steps with the help of a walker. The goal is to get him back to his old life. He turns 19 on Thanksgiving.

"It's his birthday. It's Thanksgiving. He's alive. He's with me. I'm very happy," Lopez's father said.

Lopez hopes to get back to college next fall where he plans to major in engineering. His family is trying to make all that happen as they also struggle to pay their mounting medical bills.