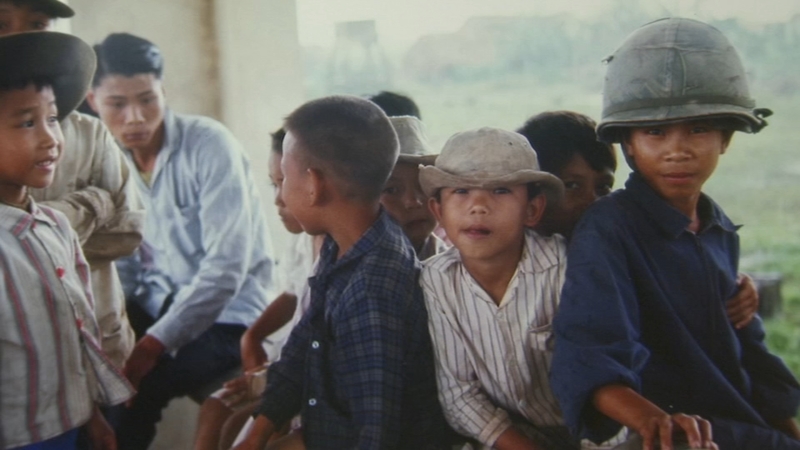 CHICAGO (WLS) -- Forty-nine years ago, a U.S. Army medic photographed children in a war-torn village in Vietnam. Decades later, the photographers' friends tracked down most of those children, now adults, to take their photos again.

On Tuesday, an exhibit of those photos, called "The Lost Children of Chon Thanh," opened at the National Veteran's Art Museum on Chicago's Northwest Side. The exhibit runs through Sept. 22.

Writer Larry Johns began the seemingly impossible quest of tracking down the children in the photos.

"Some of the pictures just struck me. It was almost like they reached through time and space and grabbed my heart," said Johns, whose older brother died in the Vietnam War in a town not far from Chon Thanh.

Johns and his wife walked villages in Vietnam with little to go on save for the pictures. They left behind brochures during their first trip four years ago. No success.

But then, "this lady grabbed one of the brochures and she screamed, 'That's my husband!' and she recognized her husband because of his big ears," Johns said.

The little boy with the big ears - named Minh - was alive and well. He was now in his 60s.

"One of the kids in a photo knew where the others were. He recognized who they were because they were his neighbors, so they all kind of moved to the same area. So he helped find the others.

Of nearly two dozen kids captured on ektachrome by medic Bob Shirley in 1969, Larry and friends found 19 who gladly posed for a new photographer, Reed Young.

Most of the found adults now live off the land, just as they did as children. And if there exists any lingering resentment about the war, Johns did not find it.

"Without exception we were treated, I couldn't believe the kindness, generosity they showed us. It was amazing," Johns said.

The exhibit aims to show the faces of war, but also was a way for one man to honor his brother.

"There are so many coincidences and turns of events that came together. It's just too fantastic, too unbelievable, and I just feel his hand in some of that. I don't know how real that is but I feel it in my heart.