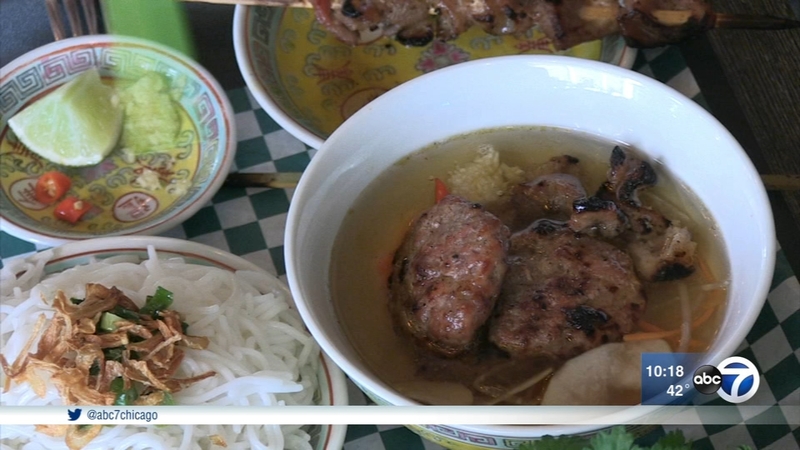 CHICAGO (WLS) -- If you're craving Vietnamese food, you might think you'd have to head to Argyle Street in Chicago's Uptown neighborhood. However, you can also get a bowl at a tiny restaurant in Glenview.

At Bun Cha Hanoi, the kitchen specializes in just a handful of dishes from Vietnam's capital, including bun cha, which was eaten by President Obama and Anthony Bourdain on his TV show, "Parts Unknown" several years ago.

The whole scene lasts just a few minutes, but by choosing to dine with Obama over a bowl of bun cha in Hanoi, Bourdain caused a ripple effect. A swelling of national pride, and in the case of Bun Cha Hanoi, located in a predominantly Korean Glenview strip mall, the creation of an entire restaurant focused on primarily one dish.

In Steve's Extra Course Video, he takes a look at the banh mi sandwich, another unique version of which is made at Bun Cha Hanoi.

Bun cha is a series of components: boiled rice stick noodles, topped with a bit of fried shallot; a bit of fresh lime, garlic and chili; roasted and then grilled pork - both the belly, in skewers, as well as ground pork patties - plus a tiny egg roll, and of course, like nearly every Vietnamese dish, a condiment plate with crunchy, fresh bean sprouts, herbs and lettuce. The base is a large bowl of fish sauce, with a few shards of unripe papaya, carrot, daikon radish and kohlrabi tucked inside.

"The reason for that is, unlike other dishes, where the sauce will give the flavor to the dish. This way, the meat itself, when you put it separately and you put it into the sauce, that's where the flavor from the meat will actually go into the fish sauce and make it into a unique sauce," said co-owner Phong Do.

You literally put whatever you like into the fish sauce - citrus, garlic, chili for heat... not to mention the grilled meats. Then with that seasoned sauce, you dip the noodles into it, ever-so-briefly, before eating them.

You eventually get around to eating the pork and the fresh herbs. It's a series of dipping, adding and eating. Just don't add everything to the bowl all at once.

"The flavor of the fish sauce is very light. It'll make the dish a bit tasteless compared to the other dishes. It will lose the uniqueness of when you actually dip into the sauce and you can sense the flavor in there," Do said.
There are other dishes on the menu, like pho and banh mi sandwiches, but if you are gonna come this far and find it in the strip mall, you've got to try the namesake dish. It really is something special.