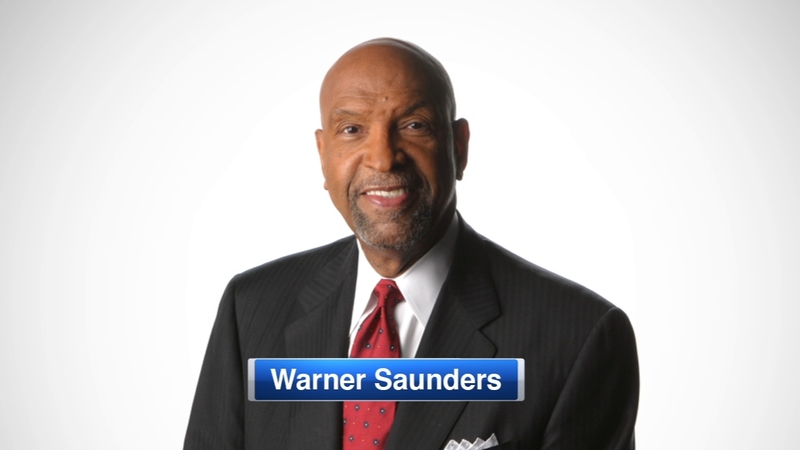 A native Chicagoan, Saunders was on television in Chicago for 40 years before signing off from NBC5 in 2009.

"Warner Saunders was a giant in our newsroom," said Frank Whittaker, station manager and vice president of news for NBC 5 Chicago. "So many of us relied on his advice and counsel as we covered stories each day. Viewers trusted him. He was genuine Chicago. We've lost a big part of our history today and he will be deeply missed."

Tuesday night, Saunders was taken to Illinois Masonic Hospital, where he died.

In a statement, Mayor Rahm Emanuel said: "Chicago has lost one of our legendary broadcasters and newsmen. For decades, Chicagoans welcomed Warner Saunders into their homes as a stalwart figure and constant companion to deliver the news of the day and put a mirror up to our communities and neighborhoods. He often stepped away from the anchor's desk to share his passion for Chicago with community groups, organizations serving youth and aspiring journalists. Our thoughts and prayers are with the Saunders family during this difficult time."

A statement from the National Association of Black Journalists' Chicago Chapter said: "The (NABJ) National Association of Black Journalists is deeply saddened today. We have lost another giant. Warner Saunders built an enviable career from a foundation of grit, determination and love for his community, and over several decades ingratiated himself into the hearts and respect of the viewership whose living rooms he entered daily as a veteran NBC Chicago news anchor. The passion and wisdom he shared has left an indelible mark on Chicago's media landscape, and his critical role in steering the helm of NABJ Chicago for many years left just as great a mark on this organization. Warner Saunders will be missed."
Report a correction or typo
Related topics:
societychicagogold coastobituary
Copyright © 2022 WLS-TV. All Rights Reserved.
TOP STORIES
Security guard shoots man in buttocks at Millennium Park
Chicago mass shooting victim ID'd as father of 2, with twins on way
9 shot, 2 fatally, on Near North Side
Postal police say they are sidelined during time of heightened crime
New hotline aims to help those struggling with opioid, substance abuse
Officer relieved of powers after teen carjacking suspect shot: CPD
Chicago Weather: Occasional showers, thunder Saturday
Show More
United cancels couple's flight, charges $4K more for same seats
Teen charged with killing man after kicking him in head in CTA attack
Great Lakes Piping Plover chick Imani spotted in Minnesota
Doja Cat drops out of Lollapalooza due to throat trouble
Legendary Cubs pitcher 'Fergie' Jenkins immortalized with statue
More TOP STORIES News