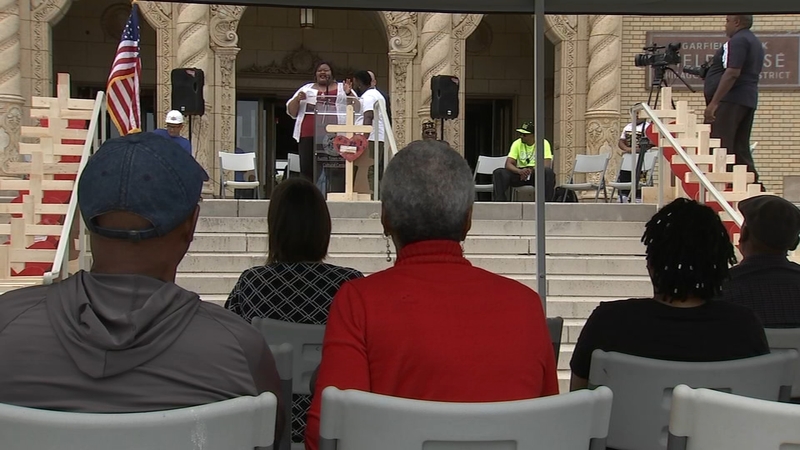 CHICAGO (WLS) -- Juneteenth is the oldest known celebration commemorating the ending of slavery in the United States.

On June 19, 1865, slaves in Texas learned they were free. The celebration of June 19 was coined "Juneteenth" and grew with more participation from descendants as they treated the day as their Independence Day, according to the Texas State Library.

"Everything else about our culture is built basically upon that. Even though we have a history before that, but that's a reference point," said Virgil Mathis, a Vietnam veteran.

African-Americans and others mark the anniversary much like the Fourth of July, with parties, picnics and gatherings with family and friends. Several celebrations took place across the Chicago area Wednesday; including one in Garfield Park that recognized African-Americans who have served our country.

Along with celebrating the historical day, Rickie Brown Sr., the founder of the West Side Historical Preservation Society, said it's necessary to recognize those who serve our country today as well.

"Today is celebrating Juneteenth and celebrating the soldiers - black soldiers," Brown said. "We have young black men and women who go overseas and give their lives for us to live and be free in this country. So I thought it would be wonderful for us to honor them the way they need to be honored."

Several veterans attended the recognition, including Army veteran Kendale Brinson. He served in the Army for 26 years, deploying during Operation Desert Storm and a combat mission in Afghanistan.

"We had to survive slavery and then to be an actual American citizen, we wanted to be a part of everything else that came along with it," Brinson said. "Being a service member is probably one of the top honors you can put along there."

Brinson now makes music to honor his service and all who serve. He sang two of his songs, "I Salute" and "Sitting on My Back" during Wednesday's celebration, along with Marine veteran D.Cooke.

Veterans James Hobson and Zebadiah Anderson also attended Wednesday's recognition, both said they felt moved when the red, black and green flag was raised to represent the African-American pride and contributions throughout history.

"It's symbolic and means a lot to me personally," Anderson said.