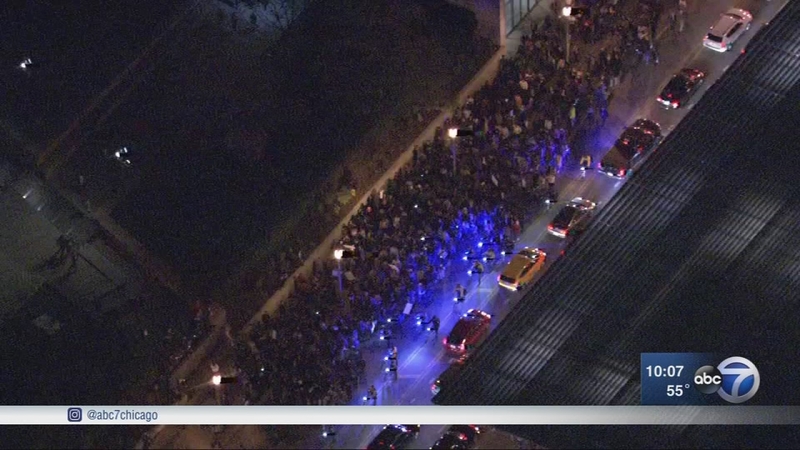 Chance the Rapper marches voters to the polls

CHANCE THE RAPPER LEADS PARADE TO THE POLLS

Hometown favorite Chance the Rapper hosted and headlined a free concert at Petrillo Music Shell in Grant Park called "Parade to the Polls." Sponsored by his non-profit group Social Works, concertgoers were led by organizers to the nearest early voting location, the site at 15 West Washington Street after the performances ended.

The event was geared toward millennium voters, who have been crucial in recent elections.

"I think everyone felt really empowered. We're sure of ourselves, and we know that we can go out and make a difference," said Ariel Pritchard.

"It's good to see people get together and come together for a cause, and actually do something with their day and vote" said Carlton Ponds.

Several hundred people gathered in Grant Park. Chance and organizers from Black Youth Project 100 then led the crowd through the streets of the Loop to join the lines of early voters. With the two groups of voters together, the line stretched for four city blocks.

A predicted voter enthusiasm gap seems to have been filled in with a steady stream of eager voters. Cook County has already seen record voter turnout. So far, more than 284,000 people voted early, easily breaking the record in 2008.

"I didn't expect people to be this impassioned but I guess it makes sense," said Peter Halliday, voting in Cook County.

At Cook County's early voting supercenter at 15 West Washington Street, the line to get in the door spanned nearly two full city blocks.

"But it's going by pretty fast, so I do suggest everyone get out here and vote," said Estonia Jones, who voted at the center Monday.

Once inside, the line snakes several times before voters finally get to the touch screen booths.

Officials said some of the numbers are due to motivation and some are due to an extended voting period and longer polling hours. The Chicago Election Board and Cook County Clerk David Orr held a press conference Monday and said this year's election will be the first where voters will be able to register on Election Day and the first more than 70 years where more than 100,000 Chicago voters applied to vote by mail.

Suburban voters in DuPage and Will counties were just as eager to fill in their ballots.

"It's always good to be able to voice your opinion on the way government's run," said Will County voter Josh Bouie.

Will County's early voting has already shattered record turnout from eight years ago.

"I think lawmakers have realized people are busy on Election Day and a lot of times can't get to the polls until late, until after work, and they may feel like their vote really doesn't count at that point," said Pam Gallahue, Naperville City Clerk.

"Not voting is not an option. No, it is not. This is a privilege, that we need to do this," said voter Carol Benway.