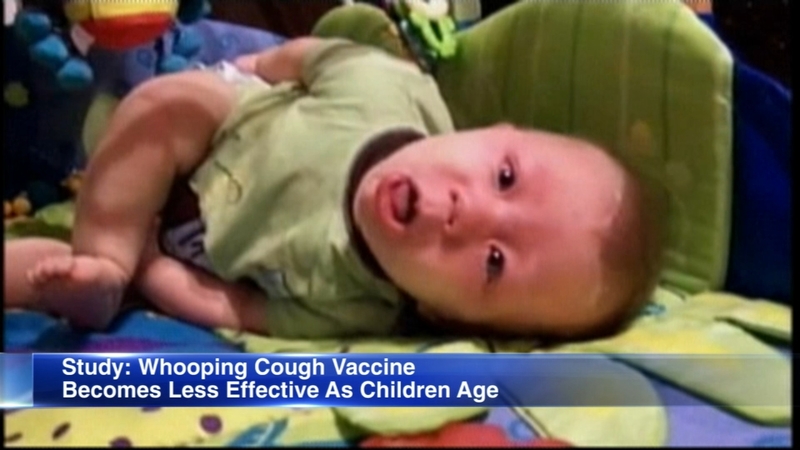 The modern vaccine for whooping cough becomes less effective as children age, a new study shows, highlighting the need for new vaccines to protect children from the highly contagious disease.

But the new research, published Monday in the journal Pediatrics, found that the risk of contracting whooping cough increased as children were further away from their last shot of the vaccine, suggesting that immunity wanes as time passes between doses, reported CNN.

Take, for example, a 5-year-old child who hasn't yet gotten their fifth dose. That child, who received their last shot more than three years ago, would be five times more likely to contract whooping cough than one who just received a dose within the past year, the study found.

The DTaP vaccine, which also protects against diphtheria and tetanus, was still found to be effective: The risk of coming down with whooping cough was 13 times higher in those who were unvaccinated, and almost twice as high in those who received some, but not all, of their shots.

"The bigger picture is that we've had several outbreaks of pertussis here in California over the past 9 years," said Dr. Nicola Klein, a co-author of the study and director of the Kaiser Permanente Vaccine Study Center. She emphasized that the vaccine generally works, but noted that "most of the children who had pertussis in our outbreaks were fully vaccinated."

Conducted by scientists at the Vaccine Study Center, the research looked at nearly half a million children born between 1999 and 2016, and found that most whooping cough cases -- 82% -- occurred in children who were fully vaccinated or over-vaccinated.

Those results, the researchers wrote, suggest that "suboptimal vaccine effectiveness played a major role in recent pertussis epidemics." Over 13,000 people contracted the disease in 2018, according to the CDC's most recent provisional report, and ten people died, four of whom were less than a year old.

Whooping cough, a respiratory disease caused by a type of bacteria called B. pertussis, can lead to violent and uncontrollable coughing that makes it hard to breathe, according to the CDC. It is particularly dangerous in young babies, for whom it can be deadly.

Before 1997, the whooping cough vaccine used actual cells of B. pertussis to trigger the immune system. Those cells had been inactivated, meaning they couldn't cause disease. But to combat side effects associated with these "whole-cell" vaccines, the CDC recommended in 1997 that a different type of shot be used: DTaP.

The new vaccines reduced side effects such as fever-associated seizures. The vaccines were created with little bits of the bacteria -- called antigens -- instead of entire cells.

Research has shown these new vaccines to be effective at preventing whooping cough, but a growing body of evidence suggests that protection decreases over time. One meta-analysis, for example, found that the odds of pertussis increased by 33% every additional year after the third or fifth dose of the vaccine.

"There is global recognition that the whole-cell vaccine has longer-lasting protection than the acellular vaccine," said Klein, referring to the older version of the vaccine used in some developing countries.

Still, that doesn't mean that the United States should go back to using it, Klein said. "I think probably what's more likely to be acceptable to countries that are currently using (newer) vaccines is some sort of version that incorporates some of the benefits of the whole-cell vaccine with less of the side effects," she said.

Dr. Kathryn Edwards, a professor of pediatrics at Vanderbilt University who was not involved in the study, wrote in an editorial that health care organizations and the CDC must "continue to monitor the pertussis burden in the United States and work with scientists to improve the existing pertussis vaccines."

That research is ongoing, Edwards noted. One technique currently being studied involves increasing the number of antigens -- the bits of B. pertussis cells that are recognized by the immune system -- to better mimic the older whole-cell vaccines.

Another option uses living, but weakened, bacteria that are injected into the nose.