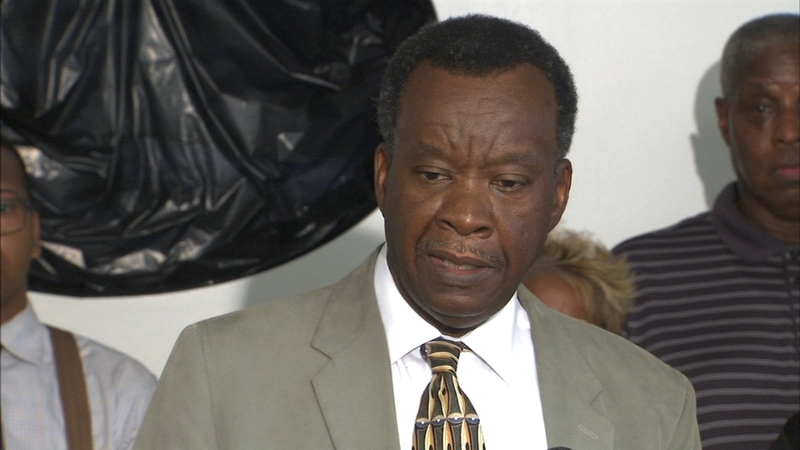 CHICAGO (WLS) -- After scrutiny about his recent cash giveaways, mayoral candidate Willie Wilson said he is putting a halt to further giving from his charitable foundation, at least for the time being.

But the philanthropist said that does not mean he will all together stop giving money to those in need. He just plans to spend his own personal money instead.

"I was raised in the South, Jim Crow days. I'm just tired of white people telling me what to do," Wilson said, surrounded by supporters at the Chicago Baptist Institute.

The millionaire businessman and mayoral candidate remains defiant, despite the questions raised about his recent cash giveaways.

"My money that I worked hard for, long as I'm not breaking any laws of the United States of America, I have a right to do what I want with my own money," Wilson said.

After one cash giveaway in July the Attorney General's Charity Trust Bureau reviewed Wilson's foundation and found he had not filed his articles of incorporation last fall. They sent him a letter informing him he was not in compliance and returned his registration check.

"And why did they send the check back, they said the check is no longer good. Well, hell, if you sit on the check 10 months of course it's not good," said former State Senator Ricky Hendon.

Wilson said he will be cancelling his foundation's back to school supplies giveaway and his Thanksgiving dinner donations. Meanwhile the Attorney General has asked Wilson for a detailed account of his foundation's donations. Three alderman have also called for a resolution asking for state or federal criminal investigations into Wilson's cash giveaways.

"We're at the start of a mayoral cycle and sometimes the perception of what's going on is just as bad as the reality. And for him not to be aware of what the perception could have been raises serious questions of judgement. Not only for his candidacy but for his foundation." said 15th Ward Alderman Ray Lopez, who was one of the resolutions supporters.

But Wilson maintains he is not trying to buy votes and has done nothing wrong, and so will keep giving away his money.

"You'll have to lock me up and die first before I'll stop that," he said.

Since being told of his foundation's paperwork problems last month, the Attorney General's Office said Wilson has since filed the needed forms, and paid the necessary fees, so he is in compliance. But his foundation is still being asked to account for what was done with all the cash he has given away.
Report a correction or typo
Related topics:
politicschicagowashington parkgrand boulevardmoneyinvestigation
Copyright © 2022 WLS-TV. All Rights Reserved.
TOP STORIES
10 shot, 2 fatally, on Near North Side
13-year-old carjacking suspect critically injured in police shooting
City Council to take up ordinance on curfew changes
Marine veteran seriously injured in Irving Park hit-and-run
Teen shot and killed in vehicle on Far South Side ID'd by ME
Motorcyclist strikes, kills man crossing street on NW Side, police say
Celebrate National Streaming Day with Hulu for $1/month for 3 months
Show More
CTU votes for new president
Disney celebrates National Streaming Day with drone show over DTLA
City Council committee to vote on NW Side casino plan
Oakbrook Terrace fights back after red light camera permit revoked
Could remains in shrinking Lake Mead be tied to Chicago mob?
More TOP STORIES News