WLS
By Will Jones, Rob Elgas and Laura Podesta 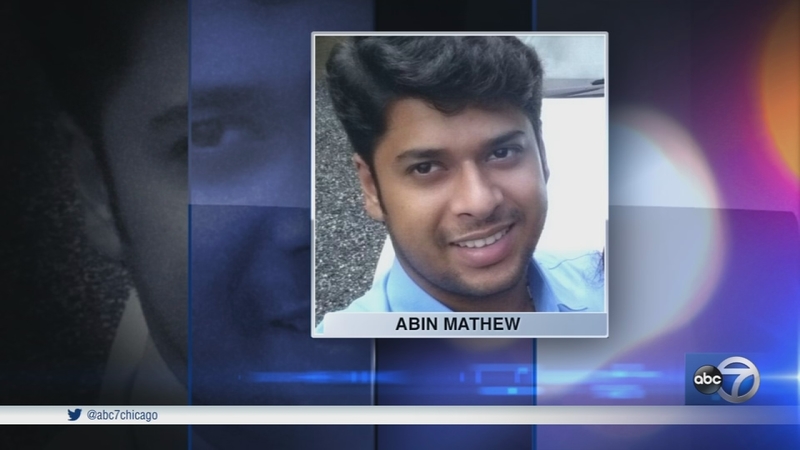 UNINCORPORATED WILLOWBROOK, Ill. (WLS) -- A 27-year-old man was killed late Wednesday night in a hit-and-run crash in unincorporated Willowbrook. He was getting ready to start a new life as a married man.

Abin Mathew, of nearby Westmont, was a passenger in a silver Nissan Rouge that police said was struck by another vehicle just before midnight on Route 83 near Mockingbird Lane. That vehicle left the scene before police arrived.

The DuPage County Sheriff's Office announced charges against 19-year-old Marlon Myles of Willowbrook. He is charged with Leaving the Scene of an Accident Resulting in Death, a class one felony. Police said he allegedly failed to yield while turning left and struck Mathew's car while it was traveling southbound on Route 83.

The Nissan flipped due to the impact. Mathew died at the scene. The four other people in the car were rushed to Good Samaritan Hospital. The extent of their injuries is unknown.

Investigators spent hours collecting evidence overnight, and are looking for the driver of a red- or maroon-colored vehicle, possibly an older model Buick.

When neighbors heard the impact of the collision, they rushed in to help. Two of them broke the windshield of the Nissan Rogue to get the victims out.
"We were asking them how many were in there, and they kept saying five but we only pulled out four. And just when that happened the police pulled up, and they shined their lights," said Christian Lara, neighbor. That's when they saw Mathew's body, he said.

"I didn't sleep a wink. I was thinking about his family, the guy's family, and praying for them, and that's really all I can do," he said.

Family members said Mathew moved from India to Westmont a few years ago.

"He's a humble, innocent person, always a caring person. Always helped us out," said Tony Peter, Mathew's cousin. "He worked hard. He worked at a gas station to support his family that way. Just overall a kind and soft-spoken person."

Peter said Mathew worked as a manager at a local gas station. He was looking forward to returning to India with his wife for their wedding ceremony.
"They got the court marriage so they can file the paperwork for her to come here. They were going to have the official religious ceremony later," Peter said. "We called her parents. Right now it's late at night over there."

The family had a hard time figuring out how to tell Mathew's father the devastating news. He was on a flight to Chicago when his son was killed.

"His dad is coming from India. He was coming to visit anyways. His flight is set to land at O'Hare sometime in the morning. We don't know how we're going to tell him," Peter said.