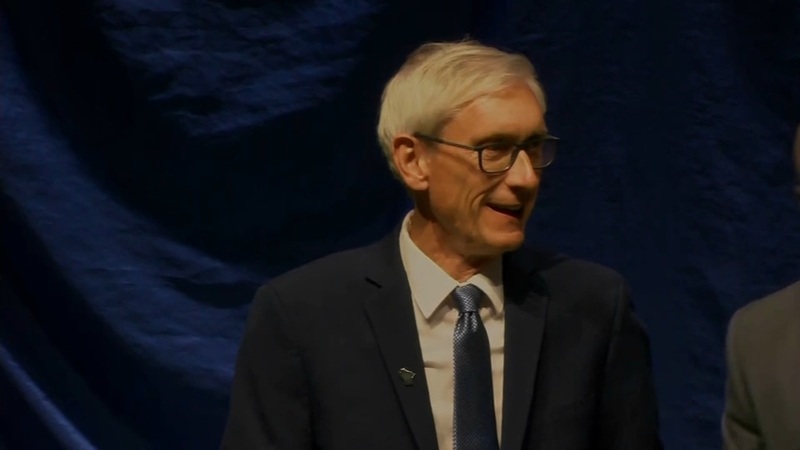 The call eventually came down to 47,000 uncounted ballots in Milwaukee County.

The city of Milwaukee's elections commissioner, Neil Albrecht, said 47,000 ballots were to be counted by 1 a.m. Wednesday, with AP projecting a winner around 1:30 a.m.

The lead flipped between the two throughout the night, sometimes as narrowly as a couple hundred votes.

If the winner ends up ahead by less than 1 percentage point, the loser can request a recount. If the margin is greater than 1 percent, there is no recount.

The last time a governor's race was decided by less than 1 percentage point was in 1960, when the winner had just under 12,000 more than his opponent.

The AP reports that Evers led Walker among voters under 45 in the race for governor. Voters ages 45 and older were split.

According to the AP, voters without a college degree were divided over Evers and Walker. By comparison, college graduates were more likely to support Evers.

Wisconsin Lt. Gov. Rebecca Kleefisch is telling supporters of Walker to prepare for a recount.

Kleefisch says to prepare for a "long, drawn-out recount."

Voters casting midterm election ballots in Wisconsin were divided over the state of the nation, according to a wide-ranging survey of the American electorate.

As voters cast ballots for governor, U.S. Senate and members of Congress in Tuesday's elections, AP VoteCast found that 43 percent of Wisconsin voters said the country is on the right track, compared with 55 percent who said the country is headed in the wrong direction.

Here's a snapshot of who voted and why in Wisconsin, based on preliminary results from AP VoteCast, an innovative nationwide survey of about 139,000 voters and nonvoters _ including 4,709 voters and 579 nonvoters in the state of Wisconsin _ conducted for The Associated Press by NORC at the University of Chicago.

RACE FOR GOVERNOR
Democrat Tony Evers had a sizable advantage over Republican Scott Walker among voters under 45 in the race for governor. Voters ages 45 and older modestly supported Walker.
Voters without a college degree leaned toward Walker. By comparison, college graduates modestly supported Evers.

RACE FOR SENATE
In the race for Senate, Democrat Tammy Baldwin had a sizable advantage over Republican Leah Vukmir among voters under 45; on the other hand, those ages 45 and older were split.
Voters with a college education supported Baldwin. By contrast, voters without a college degree were divided.
___ ___
TOP ISSUE: HEALTH CARE
Health care was at the forefront of voters' minds: 35 percent named it as the most important issue facing the nation in this year's midterm elections. Others considered immigration (19 percent), the economy (18 percent), the environment (8 percent) and gun policy (6 percent) to be the top issue.
___
STATE OF THE ECONOMY
Voters have a positive view of the nation's current economic outlook _ 68 percent said the nation's economy is good, compared with 32 percent who said it's not good.
___
TRUMP FACTOR

For 41 percent of Wisconsin voters, President Donald Trump was not a factor they considered while casting their votes. By comparison, 22 percent said a reason for their vote was to express support for Trump, and 36 percent said they voted to express opposition to Trump.
A majority of voters in Wisconsin had negative views of Trump: 55 percent said they disapprove of how he is handling his job as president, while 44 percent said they approve of Trump.
___
CONTROL OF CONGRESS
Tuesday's elections will determine control of Congress in the final two years of Trump's first term in office, and 65 percent of Wisconsin voters said which party will hold control was very important as they considered their vote. Another 24 percent said it was somewhat important.
___
STAYING AT HOME
In Wisconsin, 68 percent of registered voters who chose not to vote in the midterm election were younger than 45. A wide share of those who did not vote _ 83 percent _ did not have a college degree. About as many nonvoters were Democrats (27 percent) as Republicans (33 percent).
___
AP VoteCast is a survey of the American electorate in all 50 states conducted by NORC at the University of Chicago for The Associated Press and Fox News. The survey of 4,709 voters and 579 nonvoters in Wisconsin was conducted Oct. 29 to Nov. 6, concluding as polls close on Election Day. It combines interviews in English or Spanish with a random sample of registered voters drawn from state voter files and self-identified registered voters selected from opt-in online panels. Participants in the probability-based portion of the survey were contacted by phone and mail, and had the opportunity to take the survey by phone or online. The margin of sampling error for voters is estimated to be plus or minus 1.8 percentage points. All surveys are subject to multiple sources of error, including from sampling, question wording and order, and nonresponse.
Report a correction or typo
Related topics:
politicswisconsinelection 2018governorgubernatorial race
Copyright © 2021 by The Associated Press. All Rights Reserved.
ELECTION 2018
Half of eligible IL voters cast ballots in previous elections: data analysis
These Illinois counties rejected the most mail-in ballots in 2016, 2018
Historic congresswomen celebrate first day at work
Illinois GOP stunned after Rauner admits to recruiting 4 others to run for governor
TOP STORIES
Stan Bowman out as Hawks GM, team fined $2M after sex assault probe
Meet the investigator who unraveled the Blackhawks' front office
TX mother, boyfriend arrested in case of 9-year-old's decomposing body
Lisle HS teaching assistant went on racist rant, student says
Illinois Senate OKs repealing abortion parental notification
DNA brings pain, closure to family of John Wayne Gacy victim
Political comedian Mort Sahl dies at 94
Show More
CPD releases video of possible suspects after teen killed on SW Side
Chicago Weather: Partly sunny Wednesday
Children's COVID vaccine can protect against rare syndrome too
1 in custody after Lemont Twp. barricade situation involving child
NY teen charged with making threat that shut down Naperville North HS
More TOP STORIES News