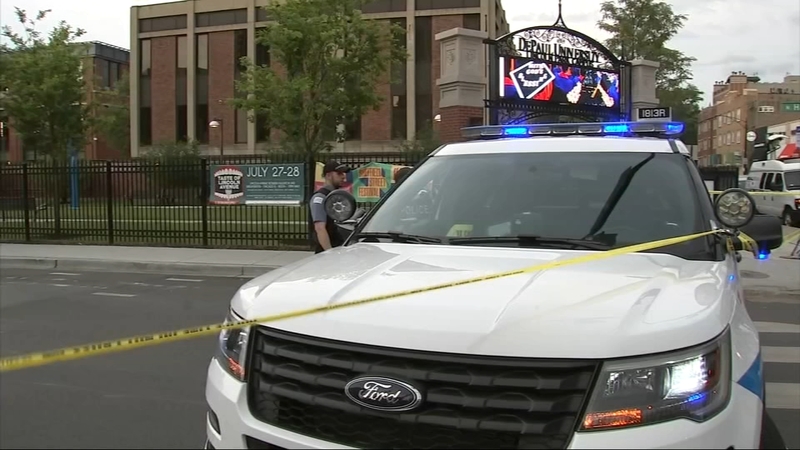 CHICAGO (WLS) -- A 22-year-old woman is hospitalized in critical condition after she was stabbed while walking home near DePaul's Lincoln Park campus Thursday morning, Chicago police and the university said.

Officers responded to the 2300-block of North Halsted Street at about 3:45 a.m. and found the woman on the ground, her face and throat slashed, police said.

The woman was transported to Illinois Masonic Medical Center in critical but stable condition with lacerations on her neck and face, police said. DePaul said that the woman was previously enrolled at the school.

Police said the woman was walking home from a bar when she was stalked by a man who intended to sexually assault her. Surveillance video shows the offender case the area, drive the wrong way down a one-way street, then get out of the car to attack the woman, though it does not show the actual attack. The victim fought back.

"It's scary because I do walk around early in the morning when I go to work around 5 a.m.," said Angelica Zavala, DePaul student.

"I'm on the train early and you do see some stuff late at night, and you don't want to be around it, but I'm shocked that it happened," said Jasmine Jones, Lincoln Park resident.

DePaul University said police have notified them of the attack. They are asking students with any information on the incident to call police or campus public safety.

"Being a man, I feel like I can walk alone at night feel like no one's gonna attack me or anything," said DePaul student Kennedy Watson. "Not the same if you're a young lady."

Police said they have some video but none of the actual attack and they're exploring whether an ID on the offender can be made through DNA evidence the victim may have obtained during the struggle.

There is a huge backlog on DNA testing through the state. CPD is currently waiting on average of 14 months for results, so it's unclear how long it could take to possibly identify her attacker who is still on the loose.

People walking by the scene in Lincoln Park were disturbed by the details.

"I have a daughter here on Webster, so very close by and every time I hear something like that, especially with a young girl, I believe she was 22, again, just horrifying," said Doug Austin, whose daughter lives in the area.