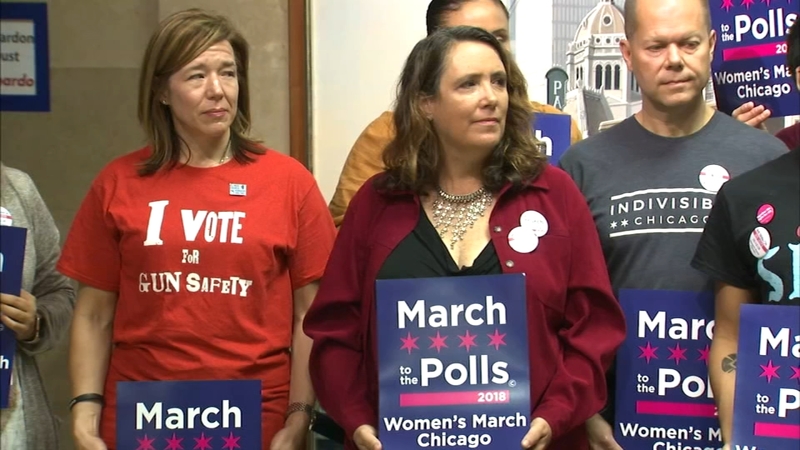 CHICAGO (WLS) -- With less than a month until the Nov. 6 election, efforts are in full swing to get people -- especially women -- out to vote.

For a third time since President Donald Trump's inauguration, Women's March Chicago is planning another rally and march. The March to the Polls will be held on Saturday, kicking off with a 9 a.m. rally at Congress and Columbus.

"The choice of the march was intentional so we can activate voters early and continue to bring others to the ballot box," said Claire Shingler, executive director of Women's March Chicago.

The focus of the march is to encourage first-time voters.

"We are aiming to open the doors of government to allow a new generation of leaders that will represent our voices in our communities," said Alex Boutrous, of Chicago Votes.

The march will end at a rally at Federal Plaza at about 12:30 p.m. After the march, march marshals will guide anyone who would like to vote early to the two downtown Chicago early voting sites.

"They are paying attention to where we have the biggest opportunity to move the needle for Illinois toward more progressive ideals that reflect and support women," said Shingler.

The confirmation of Brett Kavanaugh to the U.S. Supreme Court has fired up their base, march organizers said.

While early voting has been brisk, the Chicago Board of Elections said vote-by-mail turnout is off-the-charts with a significant tilt toward female voters.

"Women voters make up approximately 54 percent of registered voting population, but right now they make up 59 percent of of vote by mail applications," said Chicago Board of Elections spokesperson Jim Allen.

While it supports progressive issues, Women's March Chicago claims not to be a partisan organization. Organizers said their goal is to get people out to vote for candidates who represent women's issues.