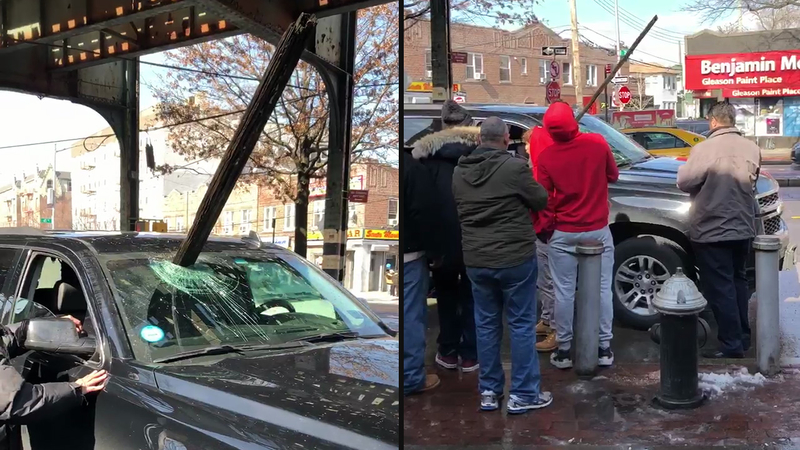 WOODSIDE, Queens -- A man in Queens is lucky to be alive after a piece of wood fell from an elevated subway platform and pierced his windshield Thursday afternoon.

It happened just before 1 p.m. on Roosevelt Avenue and 65th Street in Woodside, underneath the 7 train line.

Pictures and video posted on social media showed a horrific scene where death was certainly a possibility.

A track from the 7 train just crashed down upon a driving car around 65th Street in Woodside, piercing through the windshield. These photos are horrifying! pic.twitter.com/fBjxItlK7Q

Mahboob Lodhi, an Uber driver, came within inches of being impaled after the wooden beam came crashing down into his SUV.

He hit the brakes and luckily was not hurt, refusing medical attention.

"And boom. I'm just shocked. I'm nervous and then after a couple minutes, nothing," said Lodhi.

"He didn't say anything at all," said witness Bobby Ramiro. "He was shaken. He was scared. He was nervous. He was just looking at this direction directly."

Lodhi says he had just finished his shift so luckily no one was sitting next to him, but he says he was sprayed with shattered glass and the beam struck his arm.

"He was shaking, he was scared," Ramiro said. "He was nervous...I said, 'Are you OK, sir? Are you OK?' He said OK, but we saw there was no blood or nothing. I was scared too because I only ever see those kinds of things in movies."

Video shows the moment a piece of wood fell from a 7 train station platform and pierced a car's windshield. Luckily, the man inside was not hurt: https://t.co/7dPE3ynA1y pic.twitter.com/b4ZzRrlqHA

"He was not feeling well inside. He was shaking. So when I noticed he was shaking I said you should go to the hospital," said Lodhi's uncle Mohammad Nasiruddin.

City Councilman Jimmy Van Bramer called on the MTA to "answer for our crumbling subway infrastructure before a tragedy occurs."

Thankfully the driver was not injured, but someone could have been killed! There must be an immediate investigation into how something this dangerous could happen. @MTA must answer for our crumbling subway infrastructure before a tragedy occurs.

"We take this incident extremely seriously, are conducting a full investigation into what happened, have personnel ensuring the rest of the area is safe, and are relieved that no one was injured."

A full investigation is underway, but preliminary observations indicate that the wood appears to be from a worker or supply platform that was installed beneath the tracks years ago. There were no issues with the track or station, and subway service was not impacted.

MTA crews were at the scene, removing the rest of the wooden beams being stored under the tracks. The rest of the 7 line is now being checked for similar platforms, and the MTA says every other elevated structure in the system will be checked next.