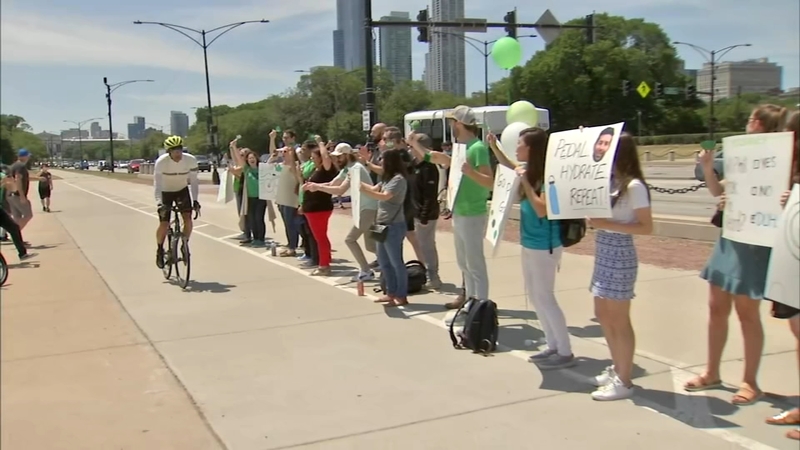 CHICAGO (WLS) -- Ultracyclist Phil Fox set off on a 920-mile adventure around Lake Michigan Thursday, starting and finishing on Chicago's lakefront in front of Buckingham Fountain.

Fox is hardly the first to ride his bike around the lake, but he intends to be the fastest.

"No one has ever tried to see how fast it can be done," he said.

His target is to make it around the lake clockwise, going through Milwaukee and Green Bay by evening, then eventually up through Michigan's Upper Peninsula, crossing the Mackinac Bridge into the Lower Peninsula and then Indiana. He hopes to finish within about 72 hours or less.

While Fox has ridden other ultra races across the country, this time he is also raising money and awareness of multiple sclerosis.

"He talks about it all the time. He wants to raise money for MS. That's his dream that he wants to do," said Leann Fox, Phil's wife.

"Two of my best friends were diagnosed with MS. I want to help them and this is the best way I know how," Fox said.

He has a support team to help with nutrition and make sure he's safe on the road. But as for the ride, in order for it to qualify for a record, he has to do it solo.

Fox said Lake Michigan is the largest body of water in the world that does not cross an international border - and he expects there will be many others out to break his record.

"I think this is gonna be the ultra-cycling record to have in the Midwest," said Fox.