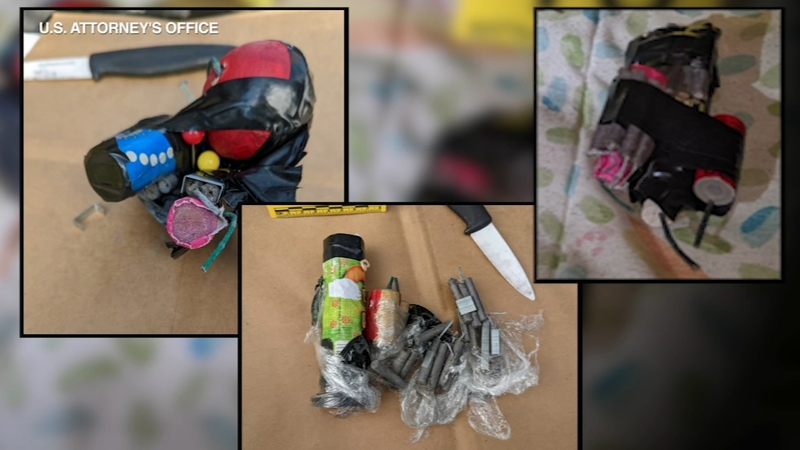 CHICAGO (WLS) -- There are new developments in a Chicago terrorism threat that authorities say originated in Maine.

A teenager there is charged in an alleged plot to blow up a mosque in Chicago.

Among the evidence FBI agents say they found in a Waterville, Maine home was an ISIS flag on the bedroom wall of 18-year-old suspect Xavier Pelkey.

Federal authorities say they also found alleged bomb components and evidence of what they claim was an ISIS-inspired plot to commit "mass murder" at Chicago area places of worship.

Pelkey is charged with possession of destructive devices. According to a federal complaint, the devices contained shrapnel to maximize injuries if detonated.

During a virtual arraignment Thursday in Maine, Pelkey said "I plead not guilty" and was then ordered held without bond as he has been since being arrested in early February.

Authorities also say they found a pair of hand-painted ISIS flags in a backpack in Pelkey's bedroom.

The teenager was taken into custody at his Waterville, Maine home where he lives with his mother.

He was arrested about a week after federal agents in Chicago raided the home of a 15-year-old alleged counterpart in the plot to attack a Shi'a Muslim mosque in Chicago.

Guns were seized in the Chicago raid. The 15-year-old has not been charged.

A Kentucky 17-year-old was also said to be involved, but he hasn't been charged either.

Authorities haven't named the mosque, but say there was a plan to kill mass numbers of people using the homemade devices.

Investigators say the Maine teenager planned to die during the Chicago attack after being shot by law enforcement.

The 18-year-old and his attorney offered no additional comments in court about the alleged plot against Chicago religious targets.

Attorneys for the government presented no additional evidence.

The other two teenagers that federal agents say were involved have not been named, nor do they appear to be facing charges.

There was no immediate reply to an I-Team message left for Pelkey's attorney in Maine.