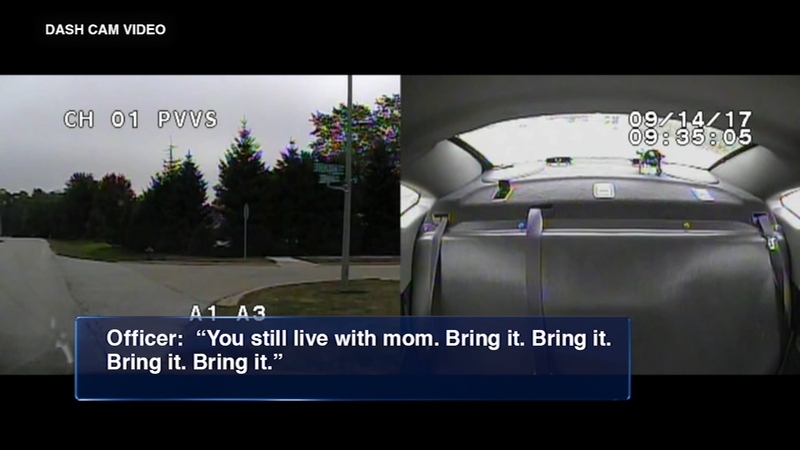 YORKVILLE, Ill. (WLS) -- Action is being taken against three police officers in suburban Yorkville accused of taunting a distressed man during a disturbance call. The incident was captured on dashcam video.

A sergeant has been fired and two other officers have been disciplined after the incident nearly a year ago. A 44-year-old man was apparently causing a disturbance by throwing trash into the street when police were called to the scene.

Police say they tried to arrest him and he resisted. Then, with the dashcam in the squad car running and the microphones on the officers live, one officer can be heard seemingly taunting the subject, who had his hands around his throat appearing to try to choke himself.

Yorkville's police chief said that is not the way his officers are trained to handle situations like that.

"It should've never escalated to anywhere near the point where it was. Walk away and write an ordinance ticket," Chief Richard Hart said.

Instead the officers are heard threatening to break the door down as the subject locks himself in the house. Later, they threaten to use a stungun on him - and eventually they do.

"On the ground. On the ground or you're getting it again. Put your hands behind your back," one of the officers can be heard saying.

The officer heard on the microphone was since suspended for 30 days without pay. The maximum allowed under Illinois labor law. And the sergeant who was the commanding officer on the scene has been fired.

"The sergeant's role on this call was to de-escalate the situation and that did not occur, so that was one of the reasons involved in the termination," Chief Hart said.