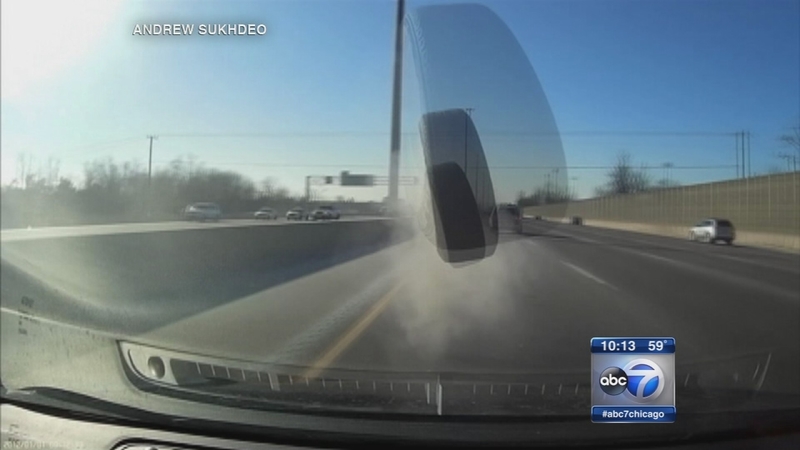 Flying tires on the expressway

CHICAGO (WLS) -- Of all the hazards hidden on the nation's highways, flying tires from moving trucks and cars are not atop on the warning list. Authorities say projectile tires rarely happen.

But now the I-Team reveals what may be missing and why these potentially deadly accidents could be slipping under the radar.

Dashcam video captures a wayward tire smashing into the windshield of a Toronto driver. He survived the encounter, but a Chicago motorist knows the feeling of helplessness and terror.

"I was in shock, I was just in total shock," says Sharon Parmet.

Parmet's routine commute into Chicago was shattered when a wheel off a sport utility vehicle flew down the Kennedy near Madison, smashing into the passenger side of her Subaru Forester's windshield.

"I see this object bounce in front of me and come towards the car and it kinda like time slowed down for a minute and I could tell it was a wheel coming right at me," she says. "Then the wheel hit the car and it was like a big crashing, crackling."

Parmet wasn't hurt, but in the past year two other flying tire incidents have proved deadly for metro Chicago residents.

On Sept. 29, 2014, 55-year-old Mark Bolan of suburban Lombard was killed instantly when a tire crashed into the passenger side of the car he was riding in on I-90 near Madison, Wis.

On July 14, 2014, 64-year-old Jovanka Mijatov of Schererville, Ind., was fatally injured on the inbound Bishop Ford when a tire flew off an SUV, striking her car.

There are other sporadic reports across the U.S. of runaway car and truck tires wreaking havoc on highways.

Transportation officials along with trucking and car industry representatives say these accidents are rare, with just a few ending in tragedy. But the I-Team discovered many of these incidents go unreported.

"The incidence of wheel separation is actually very under reported," says Mark Bailey, an engineer with MEA Forensic. "The best estimates are probably at least 50,000 times a year in North America wheels will fall off vehicles."

Bailey investigates the worst of these accidents and he's noticed a disturbing trend.

Bailey says wheels tend to come off cars between two to three weeks after they have been changed or brakes have been worked on.

A major trade organization for car repair shops says it can happen even sooner, within miles after service.

The main cause attributed to human error: mechanics or car owners not properly torqueing or tightening lug nuts.

"A consumer can simply ask, what are the torque specifications on my car," says Dan Risley of the Automotive Service Association. "And if the shop doesn't know or they look at you a little confused the might be an indication they didn't properly tighten down your wheels."

Sharon Parmet wasn't hurt, but her nerves are rattled. She's now commuting to work by train.

"It was complete luck that it didn't, it wasn't two more feet over, I would have been killed," she says.

The driver of the car that lost its wheel has so far not been cited for the incident.

In 1992 the National Transportation Safety Board investigated this problem following a rash of wheel separations in trucks. The NTSB determined they accounted for just a very small fraction of annual truck accidents.

Federal law now requires these drivers to perform basic inspections before and after trips to help prevent these disasters from happening.