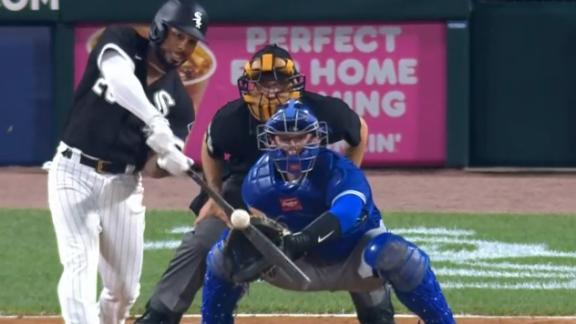 CHICAGO -- - Andrew Vaughn got one last chance against Robbie Ray, and he delivered.

Then Vaughn and company landed the knockout blow.


Vaughn homered in the seventh inning and connected for a tiebreaking sacrifice fly in the eighth, helping the Chicago White Sox beat the Toronto Blue Jays 6-1 on Tuesday night.

Shut out by Ray for most of the game, Chicago got on the board on Vaughn's fifth homer of his rookie season and then broke it open with five runs in the eighth.

"We have the fight in us. I mean one through nine and every pitcher we got that goes to the mound," Vaughn said. "It's unbelievable. ... We know that we have a potent lineup and just got to get our shot."

After Vaughn made it 2-1 with a bases-loaded flyball to deep center against Trent Thornton (1-2), Adam Eaton drove in Yermín Mercedes with a pinch-hit single. Leury García added a two-run triple, and Tim Anderson capped the rally with a sac fly.

Toronto went 1 for 12 with runners in scoring position and left nine runners on base in the opener of a seven-game trip, wasting a season-high 13 strikeouts by Ray.

"It was fun watching Robbie pitch," Blue Jays manager Charlie Montoyo said. "He was on. He's been great."

Vladimir Guerrero Jr. reached three times for Toronto on a single and two walks. Bo Bichette had two hits and a leaping grab on José Abreu's liner to shortstop in the fourth.

Ray carried a 1-0 lead into the seventh and fanned Yasmani Grandal for the first out. But Vaughn followed with a drive to right-center, chasing the left-hander after 102 pitches.


"I think Andrew is solidifying not just in his own mind but with his teammates that he belongs here and we can count on him," manager Tony La Russa said.

Chicago then loaded the bases on two walks and a single, but Rafael Dolis escaped the jam when he threw a called third strike past Yoán Moncada.

Ray allowed five hits and walked none in his first career appearance against the White Sox. He leads the Blue Jays with 82 strikeouts in 64 1/3 innings this season.

"I felt like my stuff was great all night," Ray said.

Toronto put at least two runners on in four of the first five innings, but Jonathan Davis' sacrifice fly in the second accounted for its only run against Carlos Rodón.

"All hail Carlos Rodón," La Russa said. "What he did those first five innings to keep it at one run, he's the star of the game and everybody knew it."

Blue Jays: C Danny Jansen was placed on the 10-day injured list with a strained right hamstring, and C Riley Adams was recalled from Triple-A Buffalo. Adams went 1 for 3 in his first big league game. ... OF George Springer (quad strain) traveled with the team to Chicago, and Montoyo said the plan was to have Springer work out on the field before the series opener. ... 3B-OF Cavan Biggio (sprained spine ligament) homered Sunday in his first rehab game with Buffalo.

White Sox: La Russa said RHP Michael Kopech (strained left hamstring) is feeling better. Kopech hasn't appeared in a game since May 26. "I think you're looking for, when he throws or runs, that he doesn't feel anything," La Russa said. "I still think he's got a little pinch in there that's holding him back some, but he's making progress." ... LHP Jace Fry (microdiscectomy) tossed two scoreless innings in a rehab appearance with Triple-A Charlotte.

Lance Lynn (7-1, 1.23 ERA) faces Blue Jays rookie Alek Manoah (1-0, 3.86) on Wednesday night. Lynn is looking for his fourth straight win, part of a terrific start in his first year with the White Sox. Manoah allowed four runs and four hits over 3 1/3 innings in his second career start Wednesday against Miami.