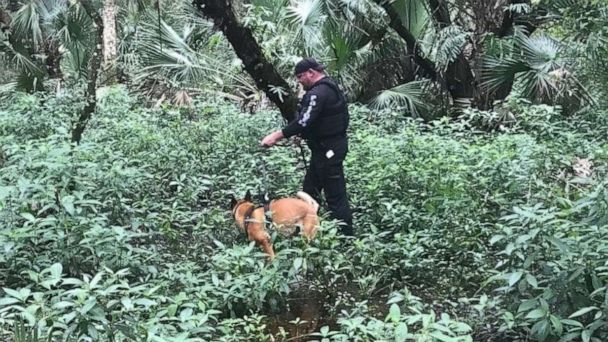 A search for Brian Laundrie, the boyfriend of 22-year-old Gabby Petito, resumed on Sunday in a 24,565-acre preserve in Florida as authorities more than 2,300 miles away combed Grand Teton National Park for clues on the whereabouts of the woman who went missing during the couple's cross-country road trip.

North Port, Florida, police said a team of officers picked up the search for Laundrie in the Carlton Reserve north of Laundrie's home in North Port. The search began on Saturday but was suspended overnight due to darkness.


"A team of more than 50 looking for anything of note after his (Laundrie's) parents say this is where he went," North Port police said in a post on Twitter Sunday morning.

Laundrie has been named by police as a "person of interest" in Petito's disappearance. The 23-year-old Laundrie, who returned home more than two weeks ago without Petito and has refused to speak to the police, has not been seen since Tuesday, according to law enforcement officials.

"Be advised that the whereabouts of Brian Laundrie are currently unknown," an attorney for the Laundrie family said Friday. "The FBI is currently at the Laundrie residence removing property to assist in locating Brian. As of now, the FBI is now looking for both Gabby and Brian."

Laundrie's family told police on Friday that they last saw him on Tuesday with a backpack and he told them he was going to the massive preserve, which he would frequent for hikes, according to Taylor.

"Our goal is to get answers. We love to be able to find Gabby. And right now we need to find Brian, too. Not only is he missing, but he potentially holds some key information in helping us find Gabby," Taylor told ABC News on Saturday night. "We have to locate him. We're hopeful to bring him in because I think he does have some information that will really lead us to Gabby. And that is the primary objective, to find this little girl."

In response to the news that Laundrie's whereabouts were unknown, a lawyer for the Petito family said in a statement: "All of Gabby's family want the world to know that Brian is not missing, he is hiding. Gabby is missing."

The search for Laundrie is the latest twist in the case that has grabbed national attention as the couple had been traveling across the country since June in Petito's 2012 Ford Transit and documenting the trip on social media. Laundrie returned home in Petito's van to North Port, on Sept. 1 without his girlfriend, according to police.

Petito's parents reported her missing on Sept. 11 after not speaking with her for two weeks.

As the search for Petito continues, FBI Denver said in an update Saturday evening that authorities are "conducting ground surveys" at the Spread Creek Dispersed Camping Area in Wyoming's Grand Teton National Park. The FBI asked for anyone who saw the couple's white van, with Florida license plate QFTG03, to contact the FBI.

Taylor confirmed that investigators have spoken to Miranda Baker, a college student who posted a TikTok video over the weekend claiming she and her boyfriend picked up Laundrie around 5:30 p.m. on Aug. 29 as he was hitchhiking alone in the Colter Bay Village area of the Grand Teton National Park in Wyoming. In the video, Baker said Laundrie offered her and her boyfriend $200 to drive him to Jackson Hole, Wyoming.

"He told us he's been camping for multiple days without his fiancee. He did say he had a fiancee and that she was working on their social media page back at their van," Baker said in the video.


She said that during the ride, Laundrie "freaked out" and demanded to be let out of the vehicle.

"He's like, 'Nope, I need to get out right now. You have to pull over,'" Baker said in the video and later in an interview with ABC's "Good Morning America."

Baker said she and her boyfriend let Laundrie out near the Jackson Lake Dam a little after 6 p.m. She said Laundrie had a backpack and was dressed in a long-sleeve shirt, pants, hiking boots and had a scruffy beard.

"For someone who was camping for multiple days, he didn't look dirty. He didn't smell dirty," Baker said.

Asked about Baker's purported encounter with Laundrie, Taylor told ABC News on Sunday, "We have spoken to her. Her timeline is plausible."

The FBI specifically said it would like to talk to anyone who was at the Spread Creek Dispersed Camping Area from Aug. 27 to 30 and may have seen the couple or their van. The agency said it would not comment on the specifics of the information in its investigation.

North Port police were also forced to clear up a rumor about finding a body in the Carlton Reserve that spread on social media Saturday, saying it was "completely fake."

Petito was last seen on Aug. 24 leaving a hotel room in Utah. The next day, she spoke to her mother, Nichole Schmidt, telling her that their next stops would be at Grand Teton and Yellowstone, Schmidt told ABC News.

Schmidt received two text messages from her daughter's phone in the days after speaking to her, but it was unclear whether they were actually sent by Petito

"Many people are wondering why Mr. Laundrie would not make a statement or speak with law enforcement in the face of Ms. Petito's absence," the attorney representing the Laundrie family, Steven P. Bertolino, said in a statement last week. "In my experience, intimate partners are often the first person law enforcement focuses their attention on in cases like this, and the warning that 'any statement will be used against you' is true, regardless of whether my client had anything to do with Ms. Petito's disappearance. As such, on the advice of counsel, Mr. Laundrie is not speaking on this matter."

The North Port Police Department said Friday afternoon it had entered the family's home, where Brian was believed to be staying, to speak with the family "at their request."

The police later tweeted Friday, "The conversation at the Laundrie home is complete. Once we have the details, a statement will be made. We ask for calm! Please let us work through this and information will be forthcoming."


It was after that tweet that the family lawyer released the statement saying the location of Brian Laundrie was unknown.

"We've been trying to reach the family all week. This is the first time we've had communication with them, and now they're telling us that he's been gone for essentially the last four days," Taylor said in an interview with "Good Morning America" Saturday.

Laundrie's family told police about where he went after becoming "concerned about his whereabouts" and wanted to file a missing person's report, Taylor told reporters Saturday.

Laundrie's car was at the Carlton Reserve but then found again at the family's home, police said. When pressed by reporters as to how the car would have gotten back without a sign of Laundrie, Taylor said, "We are going by [the family's] word."

People had gathered outside the Laundrie home throughout the day Friday, some with bullhorns, chanting "Where is Gabby?" and calling on Brian Laundrie or the family to talk to authorities. Those people were moved from the lawn to the sidewalk as they chanted toward the house.

Brian's sister, Cassandra Laundrie, spoke to ABC News on Thursday night, saying she had spoken to police about Petito's disappearance but was mostly learning details from the news.

"Obviously, me and my family want Gabby to be found safe," she said. "She is like a sister and my children love her, and all I want is for her to come home safe and sound and this be just a big misunderstanding."

The Grand County Sheriff's Office in Moab, Utah, said last week that Petito and Laundrie did not appear to be connected to the murders of two women at a campground in mid-August. The sheriff's office said on Thursday it had been in contact with Florida authorities about investigating a possible connection to the double murder.

The two women were last seen leaving a bar on Aug. 13, one day after authorities were called about a disagreement between Petito and Laundrie while they were traveling in Moab.

The couple's white van had been pulled over after a witness called police about an altercation between the two at the Arches National Park. Moab police released body camera footage of the couple admitting they had been arguing and that Petito had slapped Laundrie, according to a police report. The couple told police that Laundrie had not hit Petito.