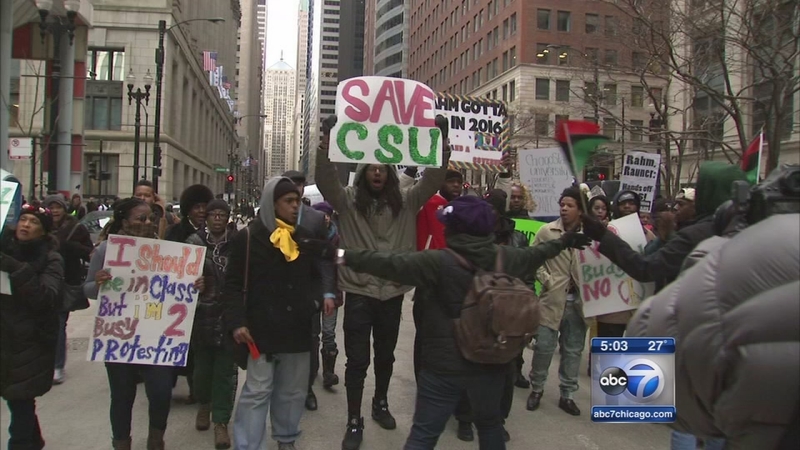 CHICAGO (WLS) -- Chicago State University students and alumni demonstrated Monday morning outside the Thompson Center in the Loop, calling for an end to the state's budget impasse.

Illinois has gone eight months without a budget and the lack of state funding has created anxiety among students. Demonstrators held signs and marched Monday aiming to pressure lawmakers to take action.

University trustees declared a financial emergency last week, but officials have said there are no plans to close.

The school is operating on financial reserves that will run out by the end of March, which could mean that layoffs, pay cuts or program cuts may be inevitable.

Students are fearful that their college dreams could be over at the university, which is located on the city's South Side and primarily serves minority students.

"We want to let our voices be heard and let the world know that the world is watching Illinois," said Daniel Jones, a CSU student.

Public universities in Illinois have not received state funding since last summer because of the budget stalemate between Republican Gov. Bruce Rauner and the Democrats who control the General Assembly.

Students said they are going to continue to fight until a budget is passed.

"Chicago State is my life," Preston said. "My mother works at Chicago State University and so she has to walk in everyday not knowing if she will have a job or not."

While CSU officials said there are no plans to close, they do concede that the budget crisis could result in a "massive disruption of service."