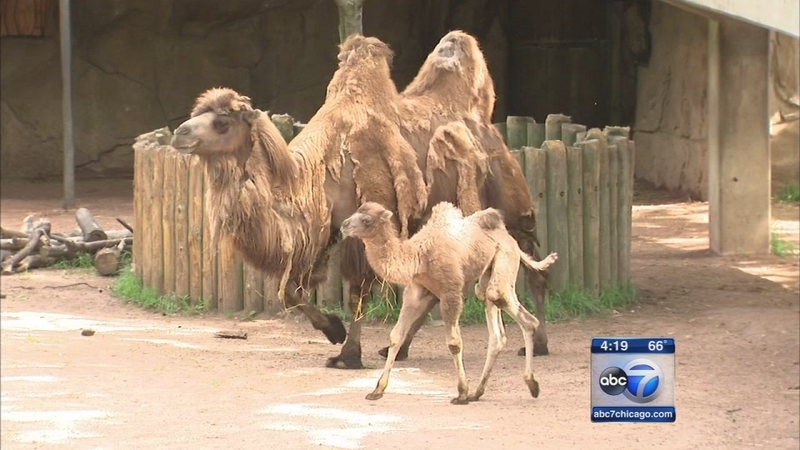 CHICAGO (WLS) -- The Broadway hit musical "Alexander Hamilton" opens in Chicago on September 27. But, in a sense, Alexander is already in the city; at Lincoln Park Zoo.

The baby Bactrian camel calf born last month at the zoo is being called "Alexander Camelton."

Alexander is the first of its kind in 18 years. The male is four weeks old and so far life is good. His ancestors hail from Mongolia and northern China.

"We have a baby Bactrian camel born May 9th. He was born at about 81 pounds, four feet tall, tall gangly legs and the kid has doing very, very well," Dan Boehm, zoological manager at Lincoln Park Zoo, said.

The Bactrian camel is the two hump version of this species. The one humper, or dromedary is the famous Sahara Desert camel. These two-humpers are all weather creatures from mountainous regions of places like Afghanistan.

Like all creatures born at the zoo, the new calf has to have a name. Some people weighed in on possible baby names for the camel.

Angela the Camel, Humpty Dumpty, Caramel and John were suggestions.

All nice suggestions but a special baby like this couldn't just be another Humpty Dumpty or John.

"One of our keepers had a very clever idea naming him Alexander Camelton, based after Alexander Hamilton and the popular award winning musical," Boehm said.

Only a month old and already the young star has a leg up on life. He's named after a revolutionary war hero and one of America's founding fathers. He will also be in the thoughts of all Broadway in Chicago music lovers.

"We've have been really surprised at the response that people have thought about this name," Boehm said.

You can see the Alexander Camelton and the four other Bactrian camels in the Antelope-Zebra area of Lincoln Park Zoo.