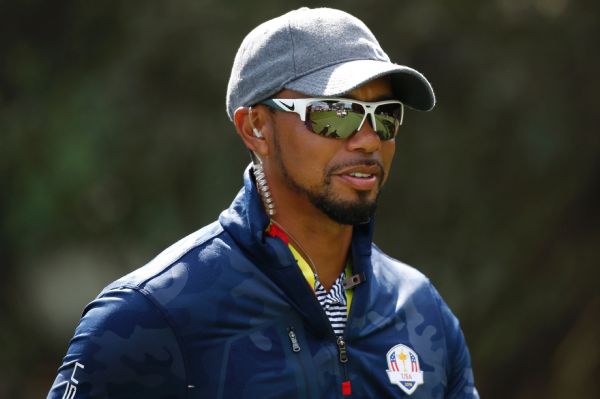 ESPN
By David Purdum
Tiger Woods hasn't played on the PGA Tour in more than a year, but he still demands respect from oddsmakers.

The Westgate SuperBook opened the former No. 1 golfer in the world at 40-1 to win this week's Safeway Open at Silverado Country Club (North) in Napa, California. Woods has not played in a PGA Tour event since finishing tied for 10th at the Wyndham Championship in August 2015. He has since had multiple back surgeries.

Only eight golfers have better odds this week than Woods. He has better odds than four golfers who have won PGA Tour tournaments this year.

Still, Jeff Sherman, assistant manager at the Westgate SuperBook and a golf odds specialist, is expecting plenty of support on Woods. Sherman said he didn't think odds around 20-1 would attract much support. At the same time, though, he knew there was no need to go anywhere near 100-1.

"He is so polarizing that there will be plenty of support at 40-1 and plenty of scoffing that there should be a zero added to [Woods' odds], as there always is," Sherman told ESPN. "[I] just tried to find a number to attract some support, while also managing it from excessive liability."

Woods is a -130 favorite to make the cut at the SuperBook, and his over/under on his first round score is set at 72. He is a -150 favorite to find the fairway with his opening first-round tee shot.

Paul Casey and Matt Kuchar are co-favorites to win the Safeway Open at 12-1, followed by Phil Mickelson at 20-1.