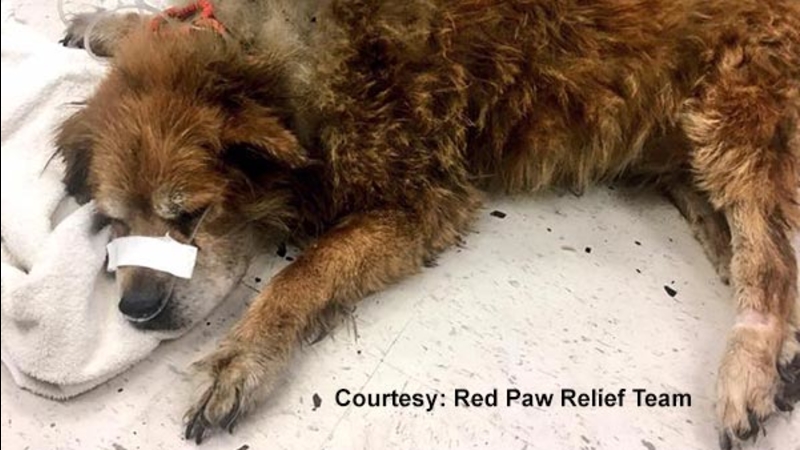 PHILADELPHIA -- Neighbors credited a family dog with saving its owner's life from a house fire in Philadelphia's Port Richmond section.

"Her dog, Che... the dog's really protective of her," neighbor Anthony Daly told Action News. "If you go past her house it's 'Bark, bark, bark, bark!' and that kind of stuff."

But neighbors say it was highly unusual for Che to be barking that early in the morning. That's what woke them up.

"When I looked out the window you could see the flames," said Daly. "The whole first floor was engulfed."

When firefighters arrived, they found the dog on top of Bulat, who was unconscious.

"The dog stayed on her chest the whole time, which prevented her from being burned totally," said another neighbor, Adele Butler.

Bulat was rushed to Temple University Hospital, where she is listed in critical condition with burns over 50 percent of her body.

@6abc The dog was taken to @CARESvet & is currently being treated for smoke inhalation. pic.twitter.com/UZZnBeOwkD

Firefighters used oxygen to resuscitate Che. The dog is at an animal hospital in Langhorne, Pa. being treated for smoke inhalation.

Neighbors are calling Che a hero.

"I think because of the dog being there, that really saved her," said Butler. "If the dog wasn't there, she'd probably be dead."

A spokeswoman for the Red Paw Relief Team said Che, who is at least 10 years old, is an 80-pound mixed Chow and Golden Retriever.

They say it's uncertain if the animal will survive because of the degree of smoke inhalation and its age.

Our hero #firedog Che, still stable (but guarded), is all tucked in for the night at @CARESvet. Sleep tight buddy. pic.twitter.com/cmy07koJaE