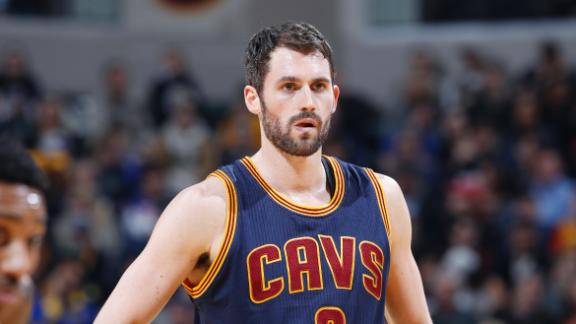 One of those games -- a nationally televised contest against the Oklahoma City Thunder last Thursday on the second night of a back-to-back -- garnered extra attention because Lue initially said he would "probably" rest Love, LeBron James and Kyrie Irving en masse, before he changed course and played all three of them.

Love underwent surgery in New York on Tuesday to remove loose bodies in the knee joint. The Cavs estimate his rest and recovery period to take six weeks before Love can play again.

Lue said the Thunder game, in which Love had 15 points, 12 rebounds and three steals in 31 minutes in a 118-109 loss for the Cavs, did no further damage to Love's knee.

"He was already heading for surgery," Lue said. "It was already [hurt]. Loose bodies were already in there so he just played through it, and then after it got to a certain point he got the MRI and he found out it was loose bodies floating around."

"He played through it, his knee was swollen a little bit," Lue said, detailing how Love's injury progressed. "Then he came and got the MRI after that third game, and so, now we have the results."

Lue was asked if the Love injury will make him rethink how he manages the eight remaining back-to-back situations (Wednesday included) on the Cavs' schedule.

"Guys are going to get their proper rest going forward, even though Kevin is out," Lue said. "We're going to be fine. Next man up. Guys got to be ready to play, and last night you saw guys stepped up and was ready to play."

Lue opted against holding anybody out against the Pacers on Wednesday, even though Cleveland played Tuesday night on the road in Minnesota, winning 116-108.

If and when Lue does rest players in back-to-backs from now until the end of the season, he said he will weigh resting James and Irving at the same time so one of the two is not left to carry the team by his lonesome on such occasions.