2 killed, 3 injured in wrong-way I-355 crash in Downers Grove 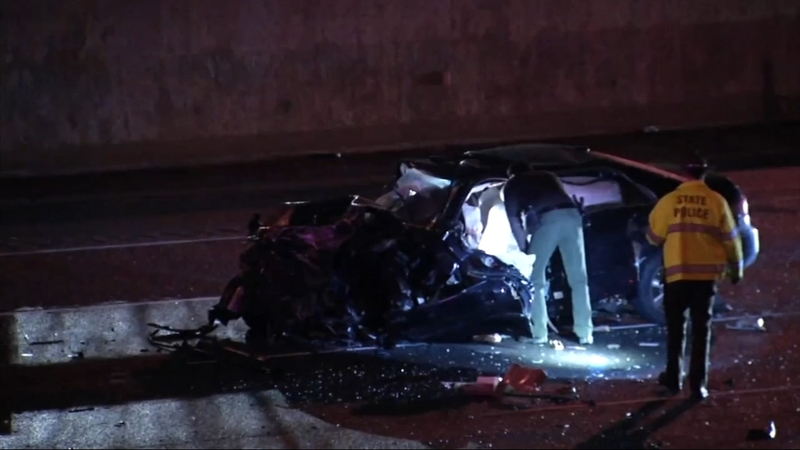 2 killed, 3 injured in multi-vehicle crash involving wrong-way driver on I-355 in Downers Grove

DOWNERS GROVE, Ill. (WLS) -- Two people were killed and three others injured after a multi-vehicle crash involving a wrong-way-driver on I-355 in Downers Grove Thursday night, Illinois State Police said.

A blue Volkswagen was driving southbound in the northbound lanes near milepost 18.75 at about 10:53 p.m. when it struck a black Honda, which caused a Ford box truck and silver Subaru to also crash, police said.

The driver of the Subaru, 66-year-old Ruth Sangbaan, and her passenger and husband, 66-year-old Bienvenido Sangbaan, were transported to Edward Hospital in Naperville. Ruth has been released, but Bienvenido was transferred to Loyola Medical Center in Maywood where he is being observed overnight. He suffered a severed thumb, a fractured rib and possibly a fractured sternum.

A 24-year-old man who was a passenger in Velazco's Volkswagen was also transported to an area hospital with life-threatening injuries, authorities said.

The driver of the Ford truck was not injured.

Dr. Arshad Mohammed was a current resident of orthodontics at UIC seeking an advanced certificate in orthodontics and a master's of science in oral sciences. Dr. Mohammed's friends said he lived with his sister in Bloomingdale and had no children. They said he was a very loving man.

The UIC orthodontics school was closed Friday in the wake of Mohammed's death.

Two of the three vehicles in the crash were destroyed and at least one person had to be extricated from one of the vehicles that barreled into a retaining wall. Troopers had to temporarily shut that area down as they picked through the wreckage to investigate.